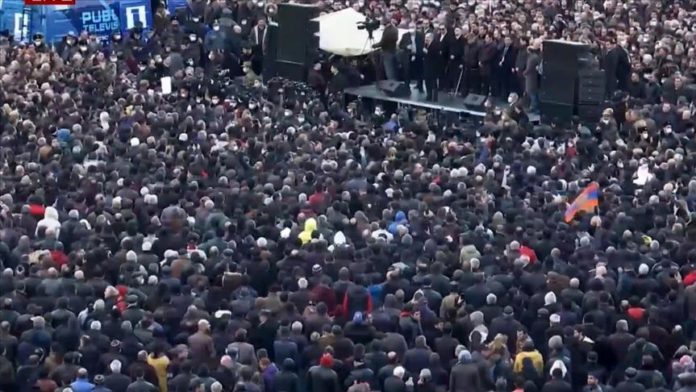 The EU Thursday urged all political actors in Armenia to avoid further escalation of tensions.

“The European Union is following developments in Armenia very closely. We ask all actors for calm and to avoid any rhetoric or actions that could lead to further escalation,” Peter Stano, the European Commission’s chief spokesperson on foreign policy, said in a statement.

The spokesperson also stressed that differences should be resolved peacefully, respecting the principles of parliamentary democracy.

The bloc also reminded that the military should remain neutral and under civilian control under the Armenian constitution.

“Maintaining the democratic and constitutional order is the only way Armenia can effectively tackle the challenges it is confronted with,” the statement pointed out.

The Armenian military Thursday called for the resignation of Prime Minister Nikol Pashinyan.

Onik Gasparyan, the chief of General Staff of the Armenian army, along with other senior commanders, released a statement calling for Pashinyan to step down.

Pashinyan called the military’s call a coup attempt, and urged his supporters to take to the streets to resist.

During the six-week conflict, which ended with a Russian-brokered truce, Azerbaijan liberated several strategic cities and nearly 300 of its settlements and villages from Armenian occupation.