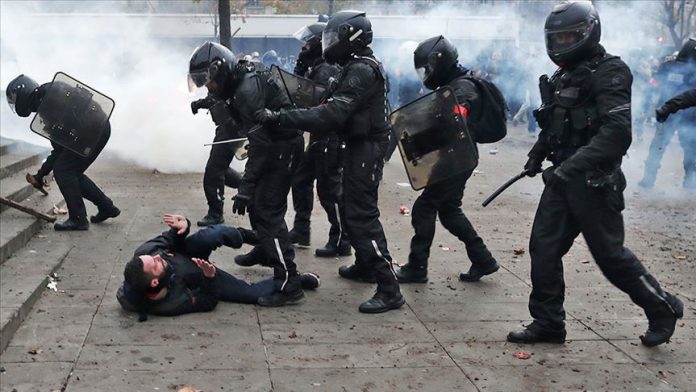 The EU remained silent Friday on French police use of excessive force against demonstrators protesting President Emmanuel Macron’s controversial pension plans.
EU Commission spokesman Eric Mamer deflected questions by Anadolu Agency about on of its employees, Mustafa Yalcin, who was injured during protests and risks losing an eye because he was hit by a tear gas canister fired by French police while on assignment covering the demonstrations Thursday.

“The European Commission respects both the right of people to demonstrate and the right and indeed the duty of the press to report on such demonstrations,” said Mamer.

“At the same time, it understands that police forces have a role to play in ensuring that demonstrations can take place. In a peaceful matter, and apart from that, we have no comment to make at this stage on the situation.”

When pressed that the EU called for restraint for protesters in other parts of the world, Mamer said: “These are situations with concern the member states and they have all of the procedures necessary in order to deal with such issues,” he said.

Thursday saw one of the biggest strikes in recent French history against Macron’s controversial pension plans.

According to the Interior Ministry, over 806,000 protesters took part in the strike Thursday, in a country of 70 million.

France currently has 42 different pension programs for various sectors, but the government proposed unifying the systems into a single pension scheme.

Under the current system, contributions by the working-age population finance pensioners.

But due to the aging population, fewer people are paying into the system.

To fix this, the government introduced a point-based system that would compensate workers with pension points for every day of work or every euro they contribute.

The reforms would gradually raise the retirement age from 62 to 64, a move expected to adversely affect many sectors.

Workers would get full pension if they retire at age 64 but would lose 5% for every year they retire early.

The demonstrations and strikes have been supported by numerous labor and police unions, as well as the Yellow Vests.