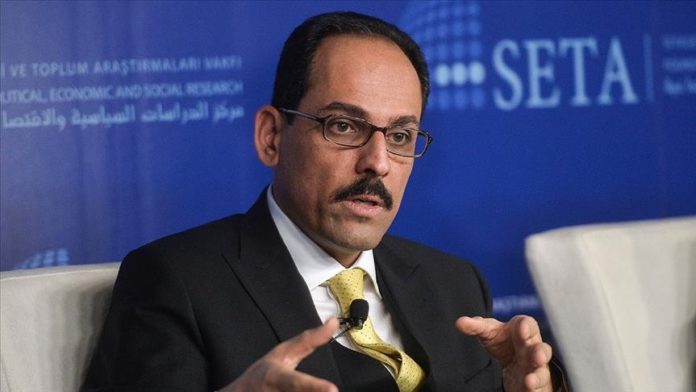 With the EU summit 2021 nine days away, Turkey’s presidential spokesman on Tuesday expressed “hope” for the leadership of EU officials in addressing the migration issue at the summit.

“As we are approaching the EU summit on March 25-26th, our [Turkey’s] hope, the expectation is that the EU leaders would show leadership there, and address this migration issue in a serious manner, in line with the values of the EU, in line with the values and principles of the international conventions,” Ibrahim Kalin said at a virtual panel organized by Ankara-based Foundation for Political, Economic and Social Research (SETA).

Kalin also urged the EU leaders to tackle the migration issue with “a view of the fact that as long as the Syrian conflict continues, the war remains, and the country remains completely shattered.”

The EU leaders will discuss the future of EU-Turkey relations during the summit next week. According to EU’s foreign policy chief Josep Borrell, the bloc will seek the renewal of the 2016 migration deal with Turkey.
Syria has been embroiled in a civil war since early 2011 when the Bashar al-Assad regime cracked down on pro-democracy protests with unexpected ferocity.

According to UN officials, hundreds of thousands of people have been killed and more than 10 million displaced over the past decade.

The 2016 deal was reached to stop irregular refugee flows and improve the conditions of Syrian refugees in Turkey.

Turkey is the largest host country for Syrian refugees and provides protection to some 3.6 million people who fled the neighboring country.
Kalin said, “the root cause of the migration crisis which led to the signing of the 2016 Turkey-EU migration agreement is this war. And as long as we avoid addressing this root cause, the Syrian war itself, we will not be able to find a lasting sustainable solution to the migration crisis.”

Addressing the panel titled EU-Turkey Statement: Reassessment of the Migration Agreement, Kalin stressed that the migration issue has reached “international dimensions” and that “the international community has largely failed the Syrian people in its policy and attitude towards the immigrants.”

He criticized the European attitude of “turning a blind eye” on the migration crisis, saying: “We have seen some of the worst attitudes and treatments of the refugees.”

Pointing out a surge in the incidents of migrants being pushed by Greek authorities in the recent months, he reaffirmed that such action is a “clear violation of all the international conventions, UN decisions as well as the European values.”

He said the EU border agency Frontex is “taking part in these pushbacks and helping the Greek [authorities].”

“The migration crisis is still there, and it will not go away as long as we continue to act in the way that we’ve been acting over the last four or five years now,” Kalin stated.

The Turkish official further said that the dynamics have changed since the signing of the 2016 migration deal, adding: “The needs are different. The educational and medical needs, for example, have become more prominent.”

“The issue is not just about putting some more additional money. It’s a matter of addressing this issue in a humane way, in a way that will end the conflict, address the root cause of this problem. And the international community, primarily the EU, the US, all of us taking a more resilient, more proactive, effective position to address this issue,” he added.

Separately, European Stability Initiative (ESI) head Gerald Knaus at the panel referred to the Syrian migration crisis as “the biggest refugee crisis in the world and has been for decades.”

Also referring to the pushbacks in the Mediterranean and the Aegean seas, the ESI head said the EU Refugee Convention and the European Convention on Human Rights were violated.

Knaus also urged Turkey and the EU to re-engage while saying that “it means that the EU must remember that Turkey still carries a huge burden or responsibility for the biggest number of refugees in the world.”
“It should put on the table another substantial sum of money to fund education, health care and social support for refugees in Turkey,” he added.

He also urged the EU to have the “same courage and vision with a realistic mutual interest-based and value-driven new agreement” signed five years ago.

“And this is something vital for the future of the European continent, and Turkey as well,” he added.