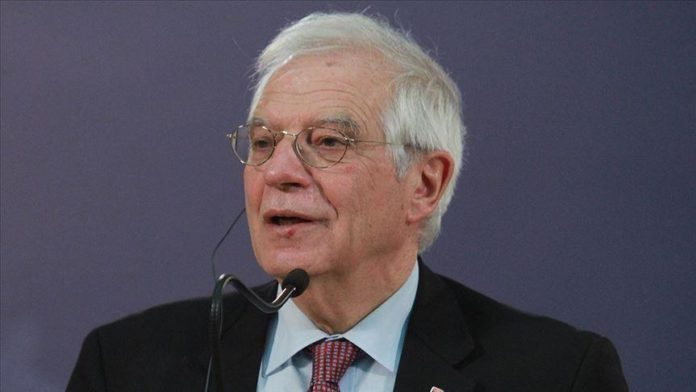 The EU is ready to provide “whatever assistance” it can to Turkish and Greek Cypriot leaders and the UN, and it also needs to become involved in the UN-led talks on Cyprus, as the Cyprus issue is an “EU problem,” said the bloc’s foreign policy chief on Monday.

“The sooner the EU becomes fully involved in the renewed settlement talks, the better,” Josep Borrell wrote on his blog in the wake of his visit to Cyprus last week, when he met with both Ersin Tatar, president of the Turkish Republic of Northern Cyprus (TRNC), and Nicos Anastasiades, the Greek Cypriot administration leader.

Stressing that the EU fully supports the UN line on the Cyprus talks, Borrell wrote: “The UN has been very clear on the parameters for finding a lasting peace: UN Security Council Resolution 2561 of 29 January 2021 recalls the importance of achieving a comprehensive settlement based on a bicommunal, bizonal federation with political equality.”

He added that a solution to the Cyprus issue “cannot come from outside.”

“The responsibility for finding a solution lies first and foremost with the Cypriots themselves,” he said.

“The EU stands ready to provide whatever assistance both leaders and the UN would find most useful,” he added. “The Cyprus problem is clearly an EU problem: Cyprus is a member state of the Union, now and after reunification; regional stability and prosperity in the Eastern Mediterranean is closely bound to a solution to the Cyprus problem.”

Adding that “Turkish Cypriots are EU citizens,” Borrell said Cyprus’ EU membership is for the benefit of all Cypriots.

Underlining that the Cyprus issue also matters for relations between Turkey and the EU, he said: “Progress in the Cyprus talks is more important than ever before.”

Turkish leaders have expressed skepticism over EU involvement in the Cyprus issue, saying that the bloc has shown itself a biased actor on the issue.

The Cyprus issue remains unresolved despite a series of efforts over the past two decades, including a failed 2017 UN initiative with the participation of the guarantor countries.

The Greek Cypriot south entered the EU in 2004, the same year that Greek Cypriots thwarted a UN bid – the Annan Plan – to end the decades-long dispute in a referendum.