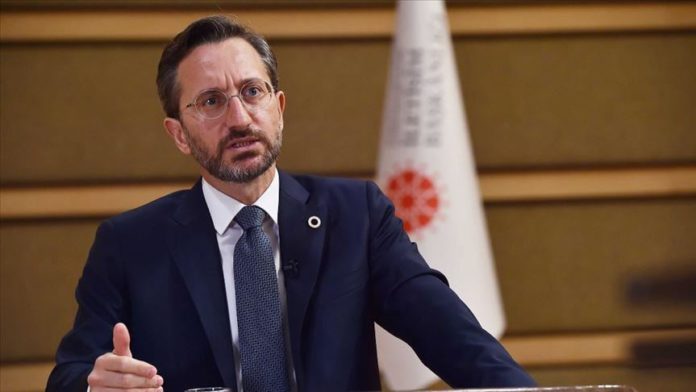 The EU imposing sanctions on Turkey would be profoundly irrational, Turkey’s communications director said on Saturday.

“We have no such expectation” of sanctions being imposed, Fahrettin Altun told news channel CNN Turk.

“Such a step would be one of the most irrational steps in the history of international relations.”

He added: “Europe’s security begins in Turkey. Strong European-Turkey relations help European countries as much as they do Turkey,” Altun said.

He added that Turkey is a chance for Europe with its position, opportunities, and capabilities and so Europe should appreciate it.

At an EU Council meeting next Thursday and Friday – postponed from this week due to a coronavirus scare – the EU may consider sanctions over the Eastern Mediterranean issue.

Greece has sought EU support in disputing Turkey’s energy exploration, trying to box in Turkish maritime territory based on small islands near the Turkish coast.

New exploratory talks between Turkey and Greece on the issue are set to start soon, the first talks in this format since 2016.

Turkey has a strong democratic culture and showed this to the whole world in the defeated coup of July 15, 2016, he added.

Pelosi’s remarks can also be seen as an attempt to interfere with relations between the two countries, he said.

In response to US President Donald Trump refusing to commit to a peaceful transition of power if he loses the Nov. 3 presidential elections, Pelosi said: “We do know who he admires. He admires [Russian President Vladimir] Putin, he admires Kim Jong Un, he admires [Recep Tayyip] Erdogan in Turkey.”

Also, Altun underlined that Anadolu Agency and Turkish Radio and Television (TRT) are crucial for presenting Turkey’s viewpoint to the world.

Turkey places great importance on prestige and trust, and all its institutions strive to boost its prestige and credibility, he added.