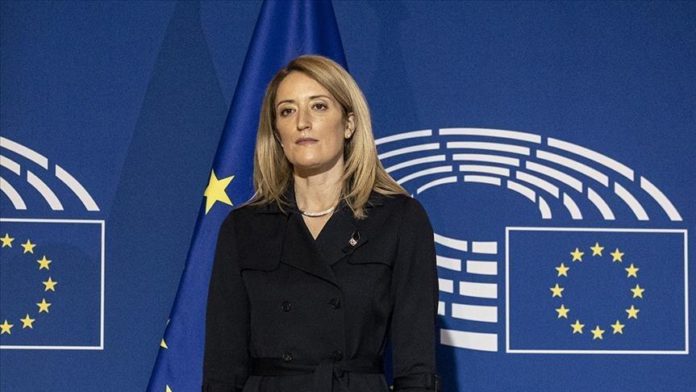 European Parliament (EP) leaders on Wednesday condemned the Russian military buildup in and around Ukraine and called on EU states to impose sanctions on Russia in case of an invasion.

Russia’s military buildup is “a threat to Ukraine’s prosperous democratic and economic development, to the rules-based international order, and to the security of Europe as a whole,” the European Parliament President Roberta Metsola and political group leaders said in a joint statement.

The statement condemned the mass mobilization of troops and heavy equipment and “the threat of an unprecedented military aggression” against Ukraine, and called on Russia to de-escalate.

“We unwaveringly support the independence, sovereignty and territorial integrity of Ukraine within its internationally recognized borders,” they asserted.

The EP leaders welcomed the EU’s diplomatic efforts to find peaceful solution for the conflict, but said EU countries should impose “severe economic and financial sanctions” on Russia if it invades Ukraine.

According to the EP, those should include exclusion of Russia from the SWIFT international payment system, stopping Nord Stream II projects, as well as a travel ban and asset freeze on “individuals close to the Russian President and their families.”

The chief EU lawmakers noted that over 14,000 people lost their lives in the Russian-fueled separatist conflict in Eastern Ukraine, and rejected further Russian attempts to destabilize the region and to recognize Donetsk and Luhansk as regions separate from Ukraine.

They also praised Ukraine’s efforts towards democratic reform and socioeconomic development, and underlined that “only Ukrainians can decide about the path their country should take to the future.”

Along with its invasion of Crimea, in 2014 Russia began to support separatist forces in eastern Ukraine against the central government, a policy that it has maintained ever since.

The US, with its European allies, has been warning since last November that Russia was preparing for aggression against Ukraine after having amassed over 100,000 troops and heavy equipment in and around its neighbor.

The Russian lower chamber of parliament, the State Duma, on Tuesday voted to recognize Ukraine’s separatist regions of Donetsk and Luhansk as independent states.

WHO chief says ‘false narrative’ being driven that pandemic is over