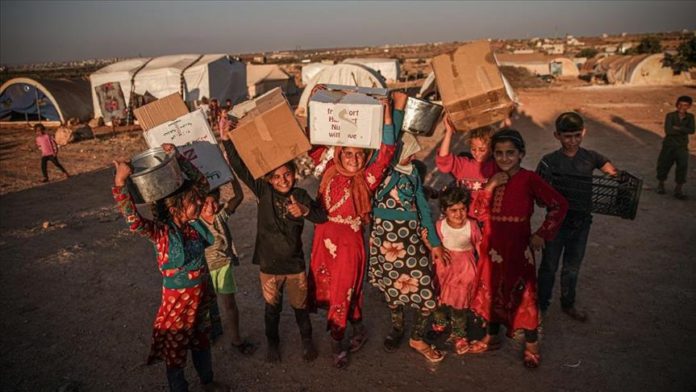 An EU official on Thursday voiced support for humanitarian aid to continue uninterrupted into Syria through the Bab al-Hawa border crossing with Turkey, as millions of refugees fear the aid lifeline’s possible closure.

Visiting Turkey’s southern province of Hatay bordering Syria, European Commissioner for Crisis Management Janez Lenarcic said Bab al-Hawa is the region’s only border crossing and is vital for the people.

The UN Security Council is set to vote on whether to renew the cross-border mechanism, which has allowed the Bab al-Hawa passage to operate since 2014, before it expires on Saturday, with Russia and China, two permanent members, intending to veto it.

“This operation means life for millions of people on the other side of the border, where 3.5 million people depend on humanitarian assistance provided through this border-crossing Bab al-Hawa,” Lenarcic stressed.

Underlining the needs of people on the other side of the border, such as food, water, shelter, medical care, and psychological support, he said: “With my presence here today, I want to shed additional light on the importance of this life-saving operation here.”

Praising the “remarkable work that is done by the UN and members of its agencies,” he said the aim of his visit included pointing “to the fact that non-renewal of this authorization across Bab al-Hawa would have tremendous, dramatic humanitarian consequences for millions of people who depend on this lifeline.”

He also admired the Turkish authorities for “supporting this operation in every way necessary.”

“And this Turkish support for this operation comes in addition to the generosity that Turkey displayed in hosting millions of refugees from Syria and other places,” he added, praising the generosity of Hatay province, which hosts the largest proportions of Syrian refugees.

Reminding that Bab al-Hawa is the “last-remaining lifeline to millions of people,” he said: “But, I would like to stress here that we would like to have more of those lifelines.”

“We would like to see Damascus provide humanitarian aid to the people of northwest Syria as well. But, as far as we know, this is not the case right now,” he told reporters.

“As long as this is not the case, we need this line from Turkey through Bab al-Hawa to be preserved,” he added.

He said the EU would continue to provide humanitarian assistance to all Syrians in need, within Syria or elsewhere. But, he added, they were also looking into ways to help them stand on their own feet.

Meanwhile, the EU commissioner said the bloc would continue to support political negotiations in line with the Security Council Resolution 2254.

*Writing and contribution by Iclal Turan

Environmental Agency set up in Turkey