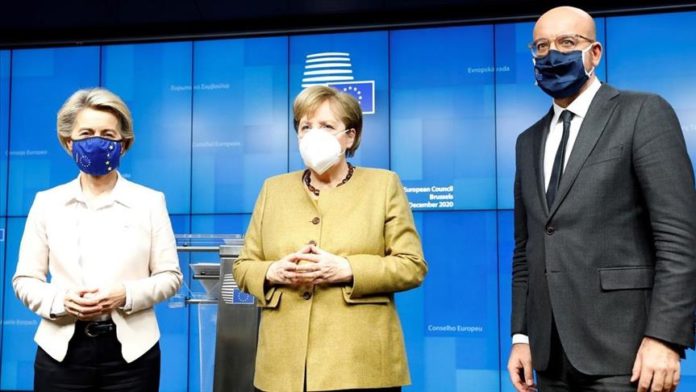 German Chancellor Angela Merkel Friday applauded the EU leaders for reaching agreements on budget and climate change at a two-day summit in Brussels.

“I think we’ve been a good team to overcome the challenges which went on the agenda,” she said in a news conference along with European Council President Charles Michel and European Commission President Ursula von der Leyen at the end of the summit.

Merkel added the next step was to get the agreement approved by national parliaments “so that the financing can be made operational as soon as possible”.

Paying tribute to Germany’s efforts on reaching the budget deal, Michel said: “it was a big step forward.”

“We have the budget, we have this recovery fund as well so that we can face digital transition, the green transition, we can support SMEs and our families as well. Because COVID-19 has been a big shock,” he said.

Ursula von der Leyen said the agreement will help the EU member states provide “a strong economic response to the crisis, while preserving the rule of law”.

“Citizens and the EU economy need our support, more than ever,” she stressed.

The EU leaders have agreed on a €1.8 trillion ($2.18 trillion) long-term budget and COVID-19 recovery package after long discussions at the first day of the summit in Brussels.

The agreement marks the end of a months-long stalemate over a clause linking distribution of funds to rule of law in EU member states, with strong opposition from Hungary and Poland.

Stressing that 2020 has started with a “terrible shock” of COVID-19, Michel said: “No one could have imagined that less than a year later, we’d be here discussing the development of vaccines, unprecedented mobilization of vaccines to protect Europeans, and the rest of the world.”

“So, the first thing I would like to say here is that we have had the capacity to reach an agreement to get together in order to implement the multi annual financial framework and the recovery fund, we established or talked about in July,” he told reporters.

“I’m convinced that after this half-year we should work on a European health union, besides other things,” Merkel said in the same conference.

“The European Union is working full speed to review the safety of vaccines and make them available,” von der Leyen said regarding the COVID-19 vaccine, adding that the EU’s drug agency EMA aims to authorize the BioNTech/Pfizer vaccine by the end of the year and Moderna before mid-January.

“The European Union will coordinate the donation of vaccines by member states, in particular to protect the healthcare workers in the Western Balkans and in our neighborhood,” she also added.

“This is a very positive battle in the field of climate diplomacy,” Michel said regarding the climate deal, adding: “We’re very pleased that we will be able to express our confidence and our unity in Europe on climate ambitions.”

The EU leaders agreed on cutting their greenhouse emissions by 55% by 2030.

Merkel added that their aim regarding the climate deal is not just to produce an economic program “but something that will take us safely into the future”.

“We should be able to give a commitment of 55% reduction by 2030. We’ve managed to come up with that commitment from the day before the United Nations meeting,” she added.

Von der Leyen said she was delighted to reach an agreement on the proposals for a new EU climate target. “Now that we have secured the funding. We have the means for our actions,” she said.​​​​​​​