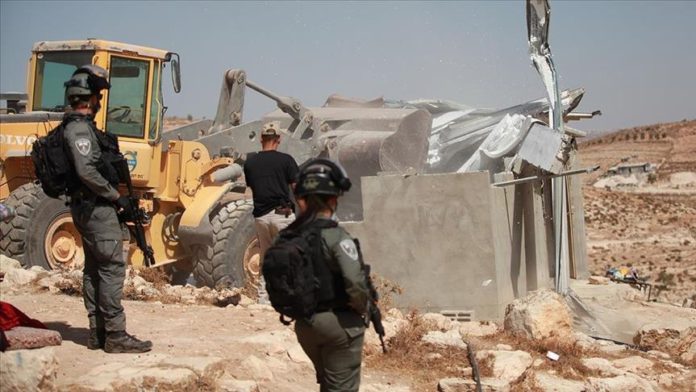 The EU on Tuesday called on Israel to stop its demolition of Palestinian homes and to instead facilitate humanitarian access to Palestinian communities.

The bloc firmly opposes “Israel’s settlement policy and actions taken in that context, such as forced transfers, evictions, demolitions and confiscations of homes,” the European Commission’s foreign policy spokesperson said in a statement.

According to the EU, around 60 Palestinians – 35 of them children – have been displaced since Israeli forces confiscated and demolished 46 structures belonging to Palestinian families in Hamsa al-Foqa in the northern Jordan Valley.

The statement called the recent developments a “regrettable trend of confiscations and demolitions seen throughout last year” that Israel continued despite the COVID-19 outbreak.

The EU considers Israel’s actions “illegal under international law and as an impediment to a viable two-state solution,” the spokesperson added.

The document reiterated the bloc’s previous call on Israel to stop all settlement expansion “in East Jerusalem and sensitive areas such as Har Homa, Givat Hamatos and E1.”

Encouraged by then-US President Donald Trump’s so-called “Deal of the Century, Israeli Prime Minister Netanyahu announced last May that his government would formally annex the Jordan Valley and all settlement blocs in the West Bank.

The EU has repeatedly called on Israel to end all settlement activity and to dismantle the already existing ones since 2001.