TurkishPress
Home News 'EU is pushing Turkey away, not the other way around' 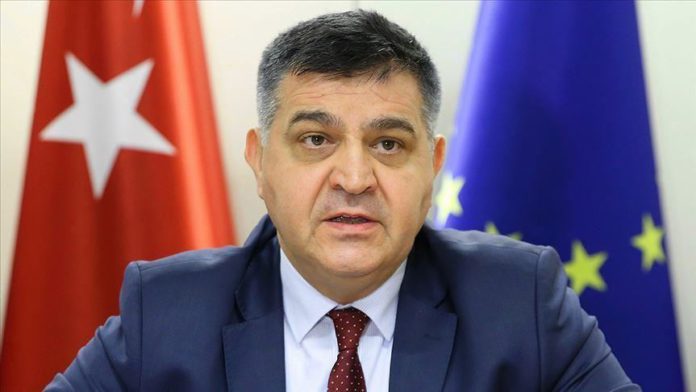 Though “narrow-minded” EU states are working to push Turkey away from Europe, Ankara will continue to maintain ties for the sake of its own interests, said a senior Turkish official on Friday.

“The narrow-minded national policies of several states” are hampering ties, but “we have to continue our relations with the EU in order to protect our larger interests,” he told a meeting of the Turkish Foreign Economic Relations Board (DEIK).

Turkey’s EU membership talks are on hold due to various obstacles from the EU, but Turkey is working to unfreeze them, he added.

The steps Turkey had to take after the 2016 Fetullah Terrorist Organization (FETO) defeated coup for its own security caused some in the EU to trust Turkey less, he said.

Due to political obstacles, Turkey’s 1995 Customs Union with the EU has not been updated, though doing so would benefit both sides, said Kaymakci.

During the German EU Presidency that began in July, Turkey started to receive important and positive signs about the issue, but again no progress was made in this regard due to disputes in the Eastern Mediterranean, he said.

“There is also the issue of visa liberalization,” said Kaymakci, referring to a pledge the EU left unfulfilled from the March 2016 irregular migrant deal with Turkey.

“I know how important this is for DEIK members. Unfortunately, the problem faced by even company CEOs getting visas [from EU states] remains. We have also taken important steps to overcome this.”

“We have fulfilled 66 of the 72 criteria” for visa liberalization, he explained.

During the coronavirus pandemic, it has been hard to make progress on the visa issue in the face of restrictions of travel between countries, he explained.

“It is important to fulfill the last six criteria and then the ball will be in Europe’s court,” he said.

“Although we were able to cooperate with the EU on fighting Daesh/ISIS, we could not cooperate against the PKK and FETO terrorist organizations as much as we wanted,” he said. “Here, of course, we need to increase communication. Terrorism is a phenomenon that affects everyone, so there should not be a mentality of ‘your terror, my terror’,” he said.

The EU did not fulfill its responsibilities on migrants under the 2016 deal and so earlier this year Turkey abandoned its obligation to fulfill the state policy to stop the migrants, he said.

He stated that with its history, politics, and geography, Turkey is a European country and will preserve its sovereignty and interests better with EU membership.