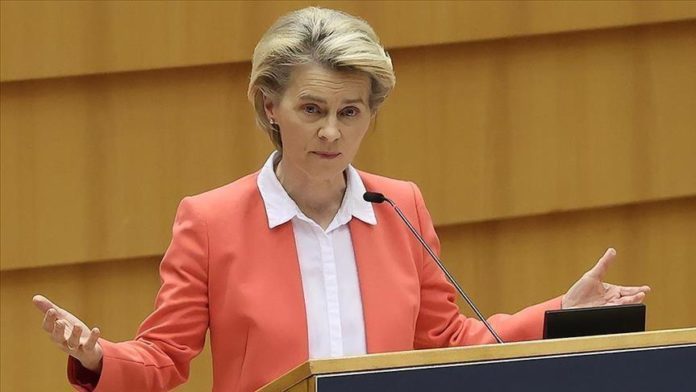 The EU’s economy is finally getting back on track as it recovers from the novel coronavirus pandemic, European Commission President Ursula von der Leyen said on Tuesday in a speech at this year’s Brussels Economic Forum.

“In 18 months from now, all 27 member states will be back on track, recovered from the crisis,” she said via video conference.

“Today, more than 60% of European adults received at least one shot, and 41% have received both shots,” she told the forum.

The fund, called Next Generation EU, is the biggest recovery package in Europe since the Marshall Plan and will boost the economy by 2%, according to von der Leyen.

“We can speed up Europe’s transition to a climate neutral and digital continent,” German Chancellor Angela Merkel said via video conference.

Stressing that the pandemic has uncovered Europe’s weaknesses and shortcomings in economy,” Merkel said: “We have seen how vulnerable supply chains can be.”

“It is going to take some time until economies are back on track and strong again,” she added.

Merkel said becoming sovereign in the digital world would not limit Europe’s cooperation with its partners, but would entail focusing on key technologies such as artificial intelligence, hydrogen and quantum mechanics.

She said such technologies would make Europe more resilient to crises, and create more opportunities for jobs, growth, and social security.

“The EU must be better equipped to make faster common decisions and implement them more so than in the past … We have to pursue sound fiscal policy in order to have the necessary freedom to maneuver to weather future crisis,” Merkel added.