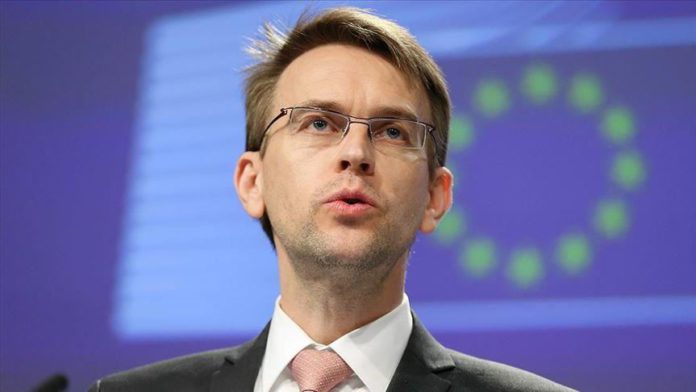 Dialogue with Turkey is necessary in order to find a solution to the crisis in Eastern Mediterranean, EU Commission said Tuesday.

Commission’s spokesman Peter Stano said EU stands with Greece and Greek Cypriot Administration as it was stated in last week’s EU Foreign Ministers’ meeting in Berlin and they want a de-escalation of tension in the region.

Stano said restrictive measures could be adopted but “we can also follow the path of striving to reduce tensions through dialogue and negotiations”.

“EU expects Turkey to act in a way to contribute to de-escalation of the tensions,” said Stano.

About the allegations that a French aircraft carrier was sent to the Eastern Mediterranean and whether this would reduce the tension, Stano said: “What happens in the Eastern Mediterranean, the situation is not good. Borrell also pointed out that what needs to be done is to sit down with Turkey and try to find solutions for de-escalation by dialogue.”

Apparently seeking to block Turkey’s legitimate maritime territorial claims, Greece signed exclusive economic zone (EEZ) deals with Italy on June 9 and with Egypt on Aug. 7. The Turkish Foreign Ministry slammed the latter in a statement, asserting that Greece and Egypt share no sea borders and that the deal is “null and void.”

'Turkey's support for Libya will continue'

UK, Turkey in agreement on political solution in Libya