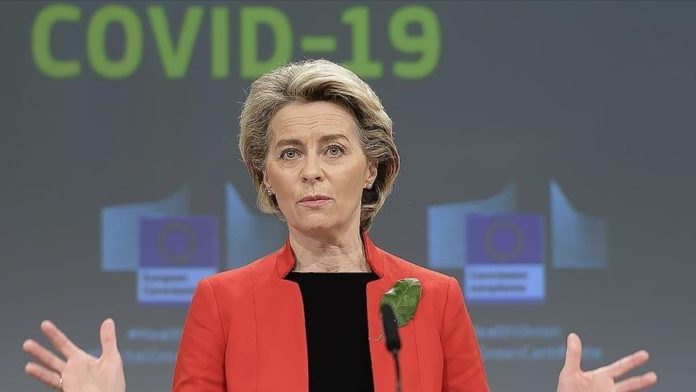 The European Commission president announced on Thursday that she received the first jab of a vaccine against the novel coronavirus.

“After we passed 100 million vaccines in the EU, I’m very glad I got my first shot of COVID-19 vaccine today,” Ursula von der Leyen said on Twitter.

The 62-year-old EU Commission president received her jab according to Belgium’s vaccination strategy since the European Commission insisted on not granting priority to their staff and treating them equal to Belgian residents.

The social media message, accompanied by the two photos of von der Leyen’s receiving the jab and showing her arm covered by an EU-flag plaster, was meant to raise trust in vaccination.

In a similar way to boost public confidence, German Chancellor Angela Merkel is also expected to receive her first AstraZeneca shot on Friday, according to local media.

Von der Leyen reassured that the vaccination campaign across the EU would speed up soon as the bloc expected more vaccine shipments.

The EU has faced difficulties over the deliveries in the past months. Pharmaceutical companies AstraZeneca and Johnson & Johnson announced delays for the second quarter of the year too.

The European Commission has already started negotiations with Pfizer/BioNTech to purchase another 1.8 billion doses for 2022 and 2023.

The EU aims at vaccinating 70% of the adult population by the end of September.

So far, 100 million doses have been administered in the EU, and 27 million people have already received both jabs, according to the European Commission statistics.

Some 18% of the population – over 2 million people – have received at least one jab in Belgium.