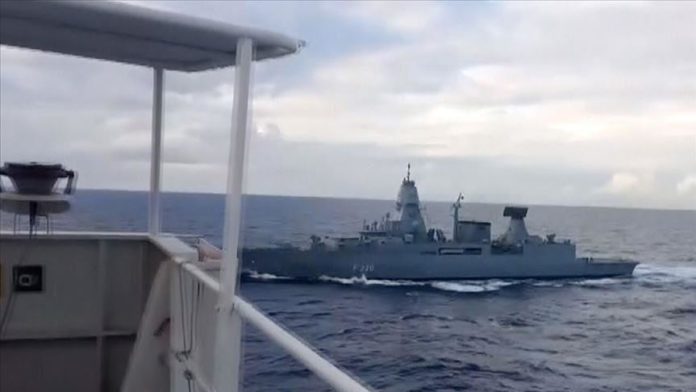 Following a controversial search of a Turkey-flagged ship carrying humanitarian aid to Libya, the EU said Operation Irini “had found no evidence of illicit material on board.”

EU Commission spokesman Peter Stano claimed in a statement that officials of the Greek-led Operation Irini suspected violations of the UN arms embargo on Libya due to the course of the Roseline A cargo vessel.

Stano argued that prior to the inspection, Operation Irini gave a four-hour notice to the Turkish Foreign Ministry as the flag state and agreed to extend the notice by an hour upon the request of the Turkish Embassy in Rome, where the operation’s headquarters are located, said Stano.

“Having received no answer from Turkey after the elapsed time, Operation IRINI boarded the vessel and inspected it in accordance with internationally agreed procedures including NATO procedures,” he said.

“The inspection was suspended later on, when Turkey formally and with delay notified Operation IRINI of its refusal to grant the permission to inspect the vessel. Until then, the inspection had found no evidence of illicit material on board and the vessel was cleared to pursue its route,” he added.

The MV Roselina A cargo ship was intercepted by the German ship Hamburg southwest of the Peloponnese islands to search its contents from Sunday evening to early Monday morning.

The German frigate was involved in Operation Irini, a European mission launched earlier this year to enforce the UN arms embargo on the war-torn North African country of Libya, though it has been accused of bias in favor of warlord Khalifa Haftar and his allies.

Turkey on Monday decried the boarding and search by the EU mission.

“We deeply regret that our vessel, which as became apparent has not violated the arms embargo, was withheld from her route for hours under severe weather conditions and that during the inspection the crew were treated as if they were criminals,” said Foreign Ministry spokesman Hami Aksoy.

“This intervention was conducted without the consent of either Turkey, as the flag state, or the master of the vessel,” said Aksoy, adding that it only came to an end upon persistent objections by Turkey.

Aksoy said the impartiality of Operation Irini was dubious as it was initiated without negotiations with either the legitimate Libyan government or Turkey or NATO, calling the double standards and unlawful approach towards ships going from Turkey to Libya unacceptable.

The ministry also summoned the ambassadors of the EU and Italy and the German charge d’affaires to protest the incident.

A new government was founded in 2015 under an UN-led agreement, but efforts for a long-term political settlement have failed in the face of attacks by the warlord Haftar.