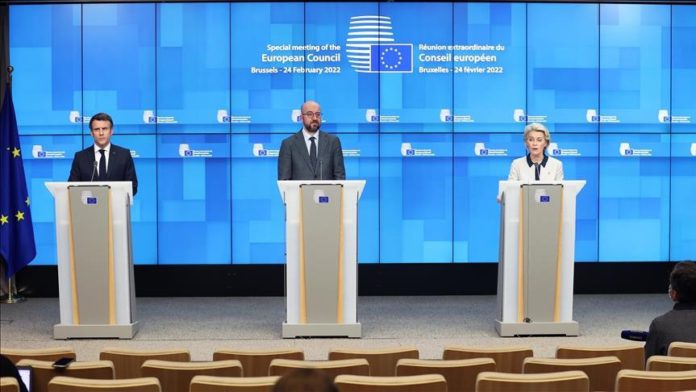 The European Union imposed a “package of massive and targeted sanctions” on Russia early Friday amid Moscow’s military intervention in Ukraine.

Sanctions were slapped on Russia’s financial, energy and transport sectors. Visa restrictions and export controls were also imposed, with access blocked to technologies.

“The package of massive and targeted sanctions approved tonight shows how united the EU is,” said European Commission President Ursula von der Leyen at a joint press conference following the special meeting of the European Council on the situation in Ukraine. She was flanked by European Council President Charles Michel and French President Emmanuel Macron.

“Second, we target the energy sector, a key economic area which especially benefits the Russian state,” she added. “Our export ban will hit the oil sector by making it impossible for Russia to upgrade its refineries.”

“Third, we ban the sale of aircrafts and equipment to Russian airlines,” she said.

“Fourth, we are limiting Russia’s access to crucial technology, such as semiconductors or cutting-edge software,” she added.

“Finally, visas,” she said. “Diplomats and related groups and business people will no longer have privileged access to the European Union.”

Von der Leyen added that the measures are closely coordinated with partners and allies such as the US, UK, Canada, Norway, South Korea, Japan, and Australia.

For his part, Michel said that during the meeting they also addressed how they can support the Ukrainian people and Ukraine by mobilizing financing capacities and humanitarian support.

“We also heard during the European Council meeting an address by Ukrainian President (Volodymyr Zelenskyy). It was a grave and dignified moment,” he said. “The president showed a lot of sang-froid and was very frank when he delivered his message in the very difficult and painful circumstances Ukraine is going through.”

Russia’s military intervention in Ukraine was announced early Thursday by President Vladimir Putin, and on the first day of the operation, more than 130 people including civilians were killed, according to Zelenskyy.