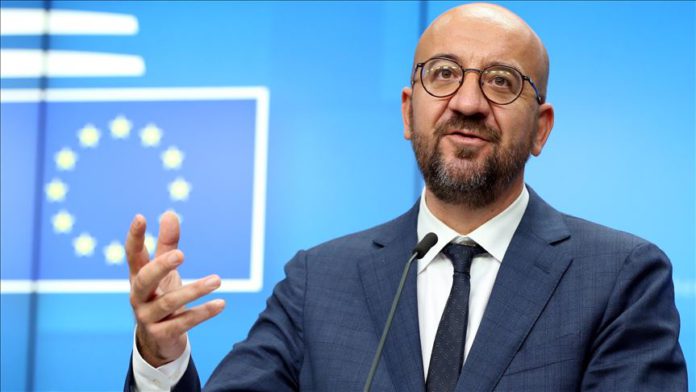 European Union Council President Charles Michel said early Friday that the bloc agreed to adopt a two-way strategy towards Turkey and wants to give a chance to constructive political dialogue but warned that all options are on the table if that was not the case.

Speaking at a news conference following the EU leaders’ summit, Michel said the main discussions of the gathering focused on the current situation in the Eastern Mediterranean and EU-Turkey relations along with sanctions on Belarus.

He said the EU pact encouraged political dialogue based on common interests but added that the EU offered full support for Greece and the Greek Cypriot administration and noted that the bloc expected Ankara to take positive steps.

According to Michel, the EU would rather have a positive agenda with Turkey, which it expects not to take any unilateral steps. He said the European pact also supports efforts to establish a dialogue between Athens and Ankara and the restart of Cyprus negotiations under the auspices of the UN.

Stating that the leaders taking part in the event suggested establishing a multilateral conference to resolve disputes in the Eastern Mediterranean, he further noted that the EU Council would monitor developments and re-evaluate the issue once again in December.

EU Commission President Ursula Von der Leyen, also speaking at the news conference, said the European pact called for collaboration with Turkey based on a positive agenda but she reiterated that the EU supported Greece and the Greek Cypriots.
She welcomed the start of reliable dialogue between Athens and Ankara but noted that the EU regretted the latter’s attitude towards the Greek Cypriot administration, which it does not recognize.

Von der Leyen warned that the EU would utilize all instruments and options should Turkey take unilateral actions, but the pact did not prefer this, as positive relations would benefit both sides.

She noted that updating the Customs Union, improving commercial relations and cooperating in terms of migration should be on the agenda of both Turkey and the EU, especially at a time when the COVID-19 pandemic has inflicted a heavy blow on international trade.

According to a statement issued by the EU regarding its summit, EU foreign policy chief Josep Borrell was asked to organize a multilateral Eastern Mediterranean conference where multiple issues such as maritime jurisdiction areas, security, energy, migration and economic cooperation would be discussed. The participants, format and date are yet to be negotiated on.

Tensions have been running high for weeks in the Eastern Mediterranean as Greece has disputed Turkey’s energy exploration.

Turkey — the country with the longest coastline on the Mediterranean — sent out drill ships to explore for energy on its continental shelf, asserting its own rights in the region as well as those of the Turkish Republic of Northern Cyprus.

To reduce tensions, Ankara has called for dialogue and negotiations to ensure fair sharing of the region’s resources.

US iterates support for peaceful transition in S. Sudan