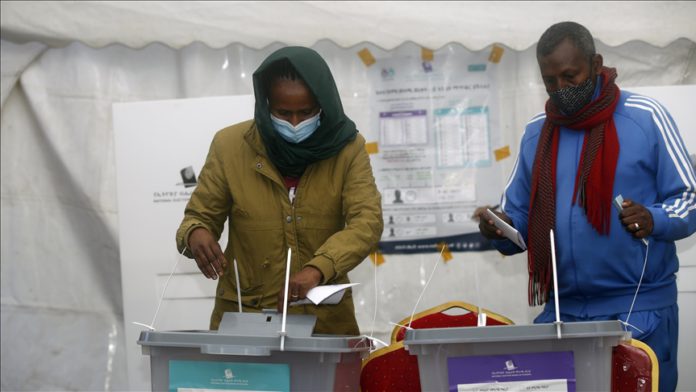 Ethiopians are lining up at polling stations to cast their ballots in the sixth parliamentary and regional councils elections on Monday.

Anadolu Agency reporters toured polling stations in the capital city of Addis Ababa where in some places voting was delayed by up to 30 minutes.

“People turned up very early in the morning to this polling station but voting actually began at 6.30 a.m. local time (0330 GMT),” Assefa Molla, an election observer representing one of the contending parties, Ethiopian Citizens for Social Justice (EZEMA), told Anadolu Agency while the other two observers nodded in agreement to what he described.

The polling station (coded 4-1) and locally known as Wondimamachoch at Abware area saw a long line of voters with security personnel watching from outside the premises.

“So far so good,” he said. “We are now reconfiguring the placement of those three booths [stands where voters mark up their ballot papers before casting them in the box] because we found the light too dim.”

The country has introduced transparent ballot boxes for the first time. Nearly 38 million registered voters to elect 547 federal parliament members in this election.

As many as 9,175 candidates have been fielded by 47 political parties, while 125 join the contest independently in the polls being conducted at more than 49,407 polling stations across the Horn of Africa country.

Etetu Ayalew, 66, a mother of six, told Anadolu Agency: “We are going to the polls with my family early in the morning because we believe that this time around it looks different.

“My eldest son told me that he would vote for the opposition party, EZEMA, the Ethiopian Citizens for Social Justice, while the rest of us vote for [Prime Minsiter] Abiy Ahmed, Prosperity Party,” she said.

Mubarak Ayalew, 49, a shopkeeper, said: “Voters are buying soda, biscuits since early morning because they found a long line at the polling station in front of my shop.”