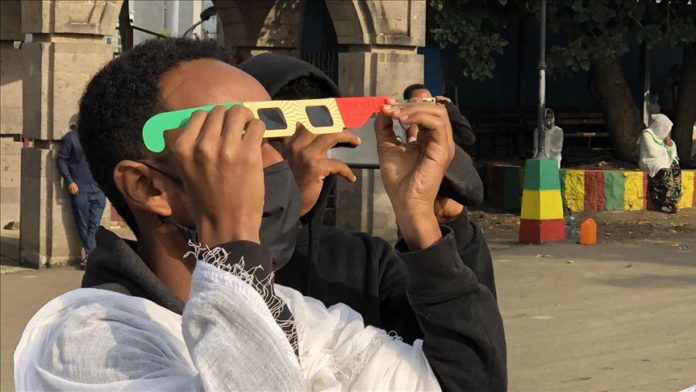 Parts of Ethiopia witnessed a solar eclipse that lasted hours starting in the early hours on Sunday.

People living in Wollega in Oromia, Ajibara and Lalibella in Amhara and numerous places in Afar woke up to a spectacular fire ring, as up to 90% of the sun was blocked by the moon.

First visible in Central and East Africa starting from the Republic of Congo, the eclipse passed over Oman, Yemen, Pakistan, India and China, covering parts of the Pacific Ocean, according to Ethiopian Space Science and Technology Institute.

Many people in Ethiopia, however, missed the once-in-decades sight due to lack of protective grasses at local markets.

In the capital Addis Ababa, many people returned to their homes disappointed after hours of gazing up as the much-publicized sight that they were unable to see due to a partly cloudy morning.

According to the local broadcaster FANA, more than 30,000 tourists had booked to travel to Lalibella — home to the rock hewn churches that are UNESCO-registered world heritage, and regarded by many as the eighth wonder of the world — to see the eclipse but had to cancel due to the novel coronavirus.

The next time a solar eclipse will be visible in Ethiopia will be in 36 years, according to the institute.