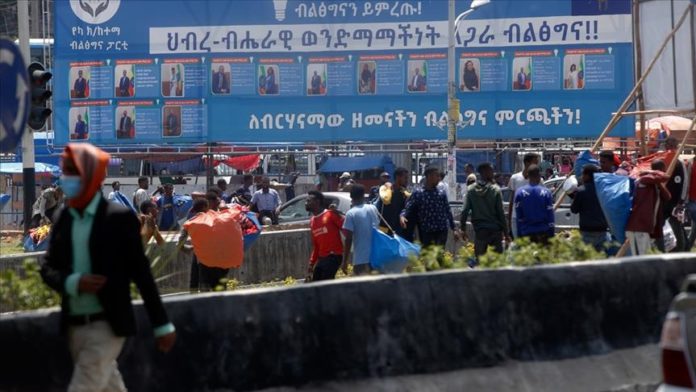 Post-electoral violence has been the mark of the past five parliamentary and regional councils’ elections in Ethiopia, held every five years.

With the nation bracing for polls Monday, the fear of violence remains the elephant in the room.

Instigation and hate speech on social media have been potent instruments used to pit one group against another. And the trend is expected to take a more sinister dimension during elections.

“Hate speech is one of the characteristics the social media use everywhere in the world,” Binyam Worku, an instructor at the Journalism and Communication School of Addis Ababa University told Anadolu Agency. “The problem in Ethiopia is the political structure is defined along ethnic lines and that adds more fuel.”

Although only 6% of Ethiopian use social media, hate has been circulated untrammeled, leading to social disturbances as the country has witnessed at various times, he said.

He said Facebook and YouTube have been some of the most exploited social media channels by Ethiopians and most accounts were opened using pseudonyms. “Instigators get away with it more often leaving the consequences to be shouldered by society,” said Worku, who is a researcher and trainer in digital media.

He advised that all in Ethiopia should be wary of election-time instigations and hate speech.

Facebook as an organization, appears to be standing on the side of electoral peace in Ethiopia this time around.

“We removed 65 Facebook accounts, 52 Pages, 27 Groups, and 32 accounts on Instagram for violating our policy against coordinated inauthentic behavior. This network originated in and focused on domestic audiences in Ethiopia,” the company said June 16. “The people behind this activity coordinated with one another and used fake accounts as a central part of their operations to mislead people about who they are and what they are doing, and that was the basis for our action. When we investigate and remove CIB [combatting Influence Operations] operations, we focus on behavior rather than content, no matter who’s behind them, what they post, or whether they’re foreign or domestic.”

Activities, it said in a press release, include “efforts to detect and remove hate speech and content that incites violence.”

Reducing the spread of misinformation, improving digital literacy and making political advertising more transparent were also some of the activities Facebook would be undertaking in Ethiopia before, on and after the polls.

“Facebook opened its first Elections Operations Center in 2018, ahead of the elections held that year in the United States and Brazil. Since then, Facebook has run operations centers for major elections around the world, including upcoming elections in Ethiopia,” it said.

More than 37 million registered voters will cast ballots in the elections that are being held after a one-year hiatus because of the coronavirus pandemic.

But the electoral board has already announced a list of regional states and localities within regional states that may not vote on the announced date due to various reasons, including the level of preparation, security and logistics, among others.

Polls in the Harari regional state in eastern Ethiopia, as well as several areas in Somali, Oromia and one district in Benishangul Gumuz state will be conducted in September.

In Tigray, where a massive law enforcement operation has been ongoing since November, elections will not take place anytime soon. The hitherto all-too-powerful TPLF party has been launching sporadic attacks from the bushes in recent months, trying to regain power at least in the regional state, though the Ethiopian parliament declared it a terror organization.

The Tigray region is currently being run by an interim administration.

Two parties, Oromo Liberation Front and Oromo Federalist Council, have withdrawn from the electoral contest to cast a shadow on electoral integrity. But the government said it will make sure elections this time will be democratic, free and fair. It said it would accept results and urged parties to do the same.

If that level of civility comes about on the Ethiopian electoral scene, it would signal the first-ever democratic stride made by Africa’s second most populous nation.

The degree of independence the electoral board has displayed during the electoral process as it is well in charge of the most complex work of organizing an election in a nation troubled by ethnic division, conflicts and other socio-economic maladies, was nothing short of miraculous.

In the previous five elections held since 1995, the body was as weak as it was subservient to the ruling party — the now-defunct Ethiopian People’s Revolutionary Democratic Front – a four-party coalition that was greatly influenced by the Tigray People’s Liberation Front — some of whose leaders are now in prison standing trials or in the bushes launching sporadic attacks.

As for the role of social media in the latest episode of Ethiopian elections, Binyam said: “Marked improvements are being seen in the ways people are communicating via social media, particularly on Facebook.”

But there is still too much hate circulating. And that needs to be tamed through persistent awareness-raising in the use and impact of digital media.