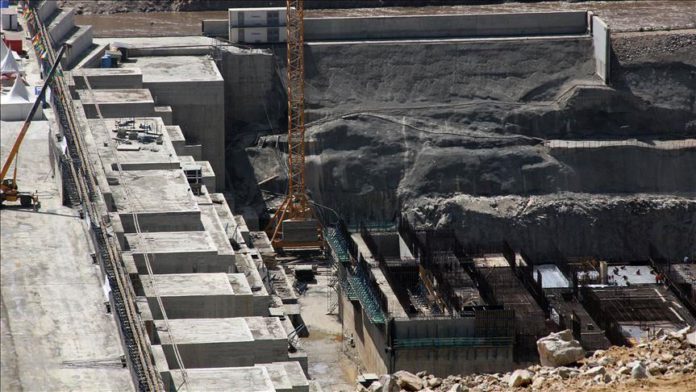 Leaders of political parties in Ethiopia on Wednesday met government officials and members of the National Committee for Coordination of Public Participation on the Grand Ethiopian Renaissance Dam (GERD) project.

“We need not focus on our differences right now but join forces in our support to our dam,” said Mussa Adem, chairman of the Ethiopian Political Parties Joint Council.

He made the call during a high level conference by political parties, The Role of Political Parties on the Support of GERD.

The joint council and the coordination committee jointly organized the conference that saw a large attendance at the Ministry of Foreign Affairs.

“Egypt and external forces that do not want us to make use of our natural resource for development are getting emboldened by perceived political division in Ethiopia,” Adem said, adding that political forces in the country should enhance their unity around GERD.

He said the joint council “believes GERD is a generational legacy.”

Tensions escalated after the US-sponsored talks on the project between Ethiopia, Egypt and Sudan broke down in February. Ethiopia accused the US for openly siding with Egypt in dialogue continuing since last November.

Ethiopia said it would start the first-phase filling of the $5 billion dam on the Nile this July.

“Ethiopia stands by the principles of equitable and reasonable utilization of the waters of the Nile, and without significant harm to downstream countries,” Gedu Andargachew, Ethiopia’s foreign minister, told the meeting.

He outlined the path that Ethiopia has been pursuing since it began construction of GERD in 2011 on the diplomatic front.

“We will continue to emphasize our natural right to the Nile, publicize our unwavering principles for equitability and fairness while at the same time countering Egyptian misleading narratives,” he said.

Egypt says it has a “historic right” to the Nile waters, a claim Ethiopia vehemently challenges on the ground saying that such notion would only legitimize hydro hegemony in a basin that incorporates 10 countries.

Minister of Water and Energy Engineer Seleshi Bekele provided a technical presentation of the project, as well as the discussion and fallout of recent trilateral talks.