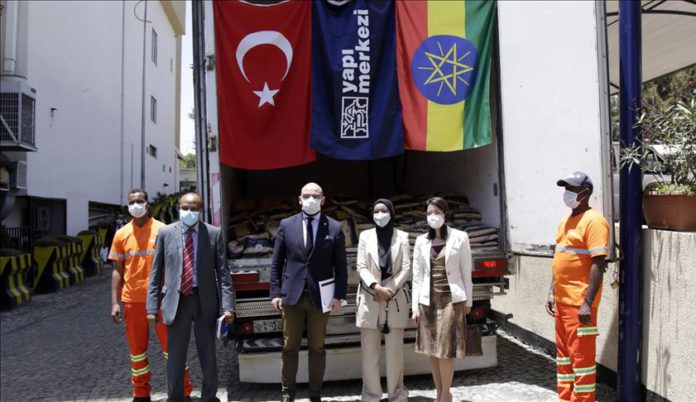 Turkey has been at the forefront of countries that responded quickly and positively to Ethiopia’s calls for help in difficult times, Filson Abdulahi, Ethiopia’s minister of women, children and youth, said on Tuesday.

The minister was speaking at a handover ceremony of a donation made by Yapi Merkezi, a Turkish construction company, of dry food in support of flood victims in the Somali regional state in eastern Ethiopia.

“We have been soliciting and mobilizing resources in response to the pandemic (COVID-19), and the Turkish government and investors were among those who came forward with positive and rapid responses,” she said.

Half of the more than $6 billion foreign direct investment from Turkey in Africa is in Ethiopia while a number of development agencies such as the Turkish Coordination and Cooperation Agency (TIKA) have been actively supporting community-based development efforts in addition to relief provision.

“Most Turkish investors have interest in investing in Ethiopia in line with Ethiopia’s development strategy and investment policy,” she added.

Turkish Ambassador to Ethiopia Yaprak Alp on the occasion said that “not only government but our private sector rose to the occasion,” adding that Yapi Merkezi, one of companies Turkey is proud of, was engaging in constructing a part of the Ethiopia-Djibouti electric railway line.

“Turkey and Ethiopia have been close friends for centuries based on real and stable relationship,” Alp added.

According to Murat Ocal, Yapi Merkezi’s Ethiopia country manager, the donation would address the needs of flood victims for emergency assistance in Somali regional state, and would also be used by those affected by COVID-19 and desert locust invasion.