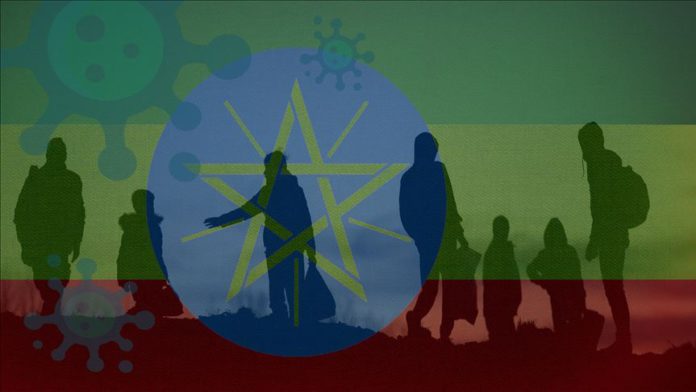 A large number of Ethiopians living abroad have been severely impacted by the coronavirus pandemic, with their lives turned upside down, leaving them barely able to survive.

Some are not able to pay their rent and bills, some have run out of food and some are relying on credit for survival as the virus impacts the global economy.

Having migrated has changed their lives, and the pandemic has become a formidable obstacle blocking their every step.

In 2019 alone, over a million citizens have fled Ethiopia due to economic hardships in the country, according to the latest data of the International Organization for Migration, with Turkey being the 12th ranking country of destination.

Anadolu Agency spoke with some Ethiopian migrants living in the US, UK, UAE, and Turkey.

They are working daily wage jobs to support themselves and their families.

Migrants are mostly hired by shops, cafes, restaurants, and nightclubs, many of which are now closed due to the pandemic.

Kinfe Hailu, a 46-year-old father of two living in the US, was working in a supermarket warehouse loading and organizing materials, but he is now unemployed. He told Anadolu Agency he would have left the country if he had gotten the chance.

“We’re now spending our savings, and the news is not promising in the US. If I can’t get the job back, my small family will starve,” he said.

Jafar Abdu also lost his job as a waiter at a restaurant in London. Although he does not have a wife or children, he said his family in Ethiopia expects him to send something for the coming Eid, the Muslim festival marking the end of the fasting month of Ramadan.

“Here in Europe, it’s not easy for someone to get a job even in normal times. The pandemic, added to this, has made it very difficult for us,” he said.

In the UAE, a district where foreigners and small-scale traders visit to shop materials to be sold back in their country, is now under lockdown, with most of its Ethiopian residents.

Semir Negash, 29, told Anadolu Agency that since there is no travel, he cannot earn a living.

“I was a translator and personal tour guide. Since there is no travel, I can’t make money now,” he said.

Model acts from Ethiopians in Turkey

Like other parts of the world, the pandemic has also affected Ethiopians living in Turkey.

Despite most Ethiopian residents in Turkey being students, they have mobilized a campaign to fight the virus in Ethiopia and help Ethiopians facing difficulties due to the closure of their workplaces.

Yasin Ali, one of the organizers of the campaign, says the outbreak has had an unprecedented impact on those who came to Turkey to work and support their families.

He told Anadolu Agency most of the workers are employed in either daily paid jobs or as trade agents. With shops, cafes, and restaurants closed and international travel suspended, this has become impossible.

“In this case, we have to have some courage to step up and help with what we can. Though most of the residents in Turkey are students, we managed to collect more than $3,000 and sent it to our embassy so that it may be used to fulfill the need for healthcare materials,” he said.

Oguz Atalay is a Turkish volunteer who is also active in the campaign to help Ethiopians in Turkey. He said he had met people who were running out of food or could not pay their rent after losing their jobs.

“As a person who strongly works to facilitate friendship between Turkey and Ethiopia, I’m saddened by what is happening these days. But we are doing what we can to reach all those who are suffering,” he told Anadolu Agency, noting that he voluntarily created a platform that provides all news related to Ethiopia-Turkish matters.

In a phone call, Girma Temesgen Barkessa, the Ethiopian ambassador to Ankara, has also thanked all Ethiopians and the Ethiopian Students Association in Turkey for organizing the campaign.

The ambassador added: “While Ethiopians are deported [elsewhere], Turkish organizations and Ethiopian students in Turkey showed cooperation to avert the situation. This is an example of good relations between Turkey and Ethiopia.”

Mehmet Sait Kirazoglu, a Turkish member of the parliament and chairman of the Ethiopia-Turkey Inter-Parliamentary Friendship Group, has also facilitated different aid programs, according to Atalay.

He added that such aid programs were conducted in Istanbul, Ankara, and Denizli province.

Coronavirus no barrier to cuisine

In Turkey, at least three restaurants are serving Ethiopian dishes. One of them is in Ankara, which will immediately be reopened after life returns to normalcy in the country.

Kedija Ali, the owner of the Blue Nile restaurant in Ankara, recently announced the restaurant will start a delivery service for those who miss their country’s cuisine. The mother of two has been striving to open an Ethiopian restaurant but coronavirus outbreak had become a stumbling block.

She said that although there are difficulties in getting the right ingredients due to the virus, she has created a mechanism to replace it with available ones and get the same taste as the original.

“The news about the pandemic was frightening. I was thinking about my family, children, and how to pass through this without having a proper income,” she said.

Regarding her new business, she said there are extra costs due to the virus, but there is no choice but to strive and see what happens in the coming days.

“We are helping each other with whatever we could,” she noted, noting she had given away some food stocks that were meant to be used for the restaurant.

She also said that starting from early May, they had launched a delivery service for the Ethiopian and East African food.

After originating in Wuhan, China last December, the novel coronavirus, officially known as COVID-19, has spread to at least 187 countries and regions. Europe and the US are currently the worst-hit regions.

The pandemic has killed over 283,000 worldwide, with more than 4.12 million cases, while recoveries surpassed 1.42 million, according to figures compiled by the Johns Hopkins University of the US.