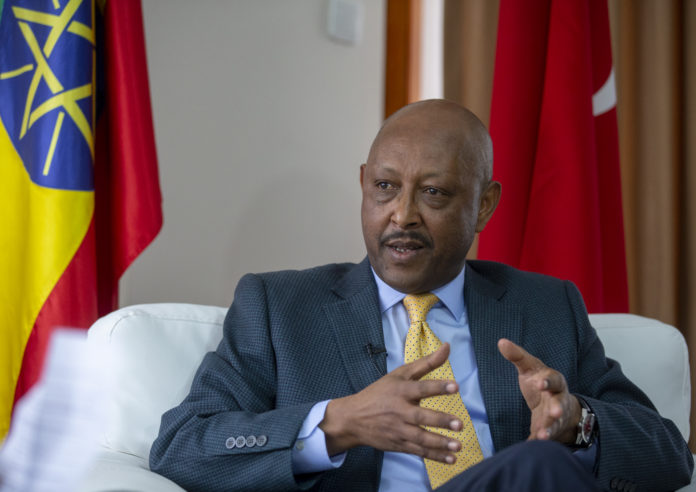 In an exclusive interview, Ambassador Girma Temesgen said that people who assumed that the military operation was targeting to eliminate the Tigrayans, should be informed of the true genesis of the problem.

“The Junta group through its paid media outlets and lobbyists has been disseminating wrong information as if the military operation has the motive of ethnic cleansing mainly targeting the Tigrayans,” he said.

Tigray is the northernmost region of Ethiopia that shares a border with Eritrea in the north and Sudan in the west.

The immediate cause that led to the Nov. 4 law enforcement measure was the direct military assault by the special force of the TPLF on the northern command post of the Ethiopian army, according to the envoy.

“They attacked mercilessly the northern command of the National Defense Forces on the night of Nov. 3. These were soldiers who have been stationed in the region for more than 20 years after the Ethio-Eritrean conflict ” said the ambassador.

“TPLF has proved its atrocity by massacring civilians in many parts of the country including Mai Kadra, a small town in the Tigray region,” he added.

TPLF militants killed at least 600 civilians in the town last month, according to the Ethiopian Human Rights Commission.

“For people who closely know the poor infrastructure of the region and backward living standards of its people, it would be ironic to say that TPLF has benefited the Tigrayan people. On the contrary, very few upper echelon Juntas have benefited under the cover of the TPLF and the Tigrayan people” Girma noted.

Reminding the troublesome moments before the reforms in 2018, he said waves of public dissatisfactions and protests due to the prevailing human rights violations, political oppression, and systemic economic corruptions were the main driving forces that led to the resignation of the former prime minister and the assumption of power by the current Prime Minister Abiy Ahmed.

The Nobel laureate prime minister was applauded by so many for his pace of reforms including the release of politicians and journalists from prisons, making peace with other political parties that were once labeled as terror organizations, most importantly ending the animosity with neighboring Eritrea shortly after he took office.

“To the dismay of the overwhelming majority, the Junta, who has been at the helm of the political power for years, resisted against these reforms to maintain the status quo. The Junta opted to follow a destructive path that threatens the unity and sovereignty of the nation,” he said.

According to Ambassador Girma Ethiopia under Prime Minister Abiy is undergoing a radical transformation, a change where all nations, nationalities, and peoples are living in harmony, peace, and equality exercising democratic rights and economic development.

Regarding the current refugee crisis in the region, he said it was the effect of the war instigated by the TPLF.

“Irrespective of the horrendous crimes committed by the Junta many attempts were made to resolve the existing differences through dialogue, but every attempt remained in vain due to the stubborn nature of the Junta and their wish to maintain the Status quo,” he added.

Thousands of Ethiopians had crossed to Sudan to escape clashes between government forces and the TPLF in the region.

According to Girma, on Dec. 28 the government completed the law enforcement measures taking control of the TPLF command post in Mekelle.

“The current major remaining task of the government is rehabilitating the war displaced, providing humanitarian assistance, reconstructing the infrastructures, and establishing the provisional regional government of Tigray,” he said.

He also said that TPLF, committing all those “heinous, barbaric and inhumane” crimes against its brothers and sisters, further went on to internationalize the issue and drag others into the conflict with the view of destabilizing the region as a whole.

“Nevertheless, the continental and regional organizations that of the African Union and IGAD (Intergovernmental Authority for Development) respectively have fully sympathized the conflict as an internal law enforcement matter for which the government of Ethiopia is thankful,” said the Ambassador.

Hailing the strategic relations between Turkey and Ethiopia, Girma said that Ankara was among the first to express its concern and understanding of the situation in Ethiopia.

In light of this, Turkey’s Foreign Minister Mevlut Cavusoglu during his telephone conversation told his Ethiopian counterpart Demeke Mekonen, that his country understands the law enforcement measures of the Addis Ababa government.

“This sympathy is the outcome of our longstanding partnership and honoring the mature relationship between the two countries,” he added.

The envoy further said that the plans are underway to celebrate the 125th year of the establishment of diplomatic relations between the two countries in February 2021.

He also applauded the Turkish global wire Anadolu Agency for doing fair reporting about the situation.