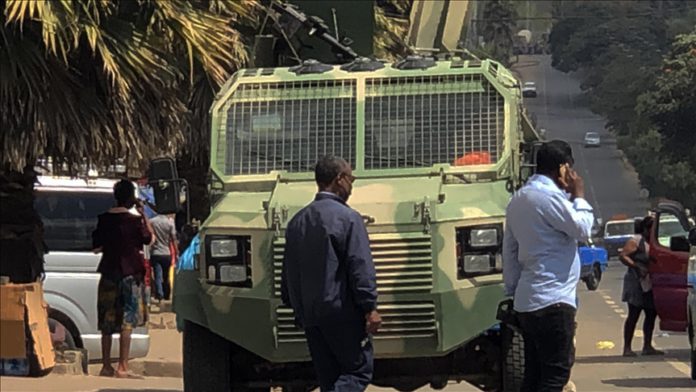 Residents of the city of Mekele, capital of the restive Tigray regional state, observed a “stay-at-home protest” as ambassadors to Ethiopia and the African Union paid a visit on Wednesday.

Mekele, home to more than half a million people, suddenly appeared as a ghost city as people remained at home, with businesses shut leaving the streets largely deserted.

“We have been told to shut our businesses by a group of youths who went door-to-door while a circular was also distributed to the same effect,” a restaurateur told Anadolu Agency on anonymity.

A crew of Anadolu Agency has been in the city of Mekele since last Friday, observing normal activities of life with people moving about, businesses open, electricity and telephone operational; but no internet services.

At around 1 p.m., more than 50 resident ambassadors arrived at the Mekele airport and were escorted to the famous Planet Hotel. Accompanying the ambassadors were Redwan Hussein, the deputy foreign minister, and Dina Mufti, the spokesperson for the Foreign Ministry.

President of the interim administration for Tigray region, Mulu Nega, briefed the ambassadors on, what he described, major progress achieved by his administration since assuming office three months ago – restoring peace and security, resuming emergency relief supply and instating the administrative structures across the region.

“We have organized our administrative structures covering 72% of the Tigray region,” he said, adding the western zone of Tigray and areas in Southern Tigray have been occupied by Amhara forces.

“That is an internal problem and we hope to solve it soon,” he said. “Basic services have been restored in all the six zones of the regional states such as electricity, transportation and telephone.”

Humanitarian access has improved significantly with aid agencies such as USAID, OCHA (Office for the Coordination of Humanitarian Affairs), and WFP, among others, visibly operating.

On Nov. 4, 2020, the Ethiopian government launched a massive law-enforcement operation against the Tigray People’s Liberation Front whose forces attacked the Northern Command of the National Defense Forces. On Nov. 8, Ethiopian Prime Minister Abiy Ahmed declared the military confrontations over.

According to Nega, sporadic fighting continued while the 10,000 convicted criminals who were set free by TPLF as its forces retreated to the bushes were involved in looting, robbery and other crimes.