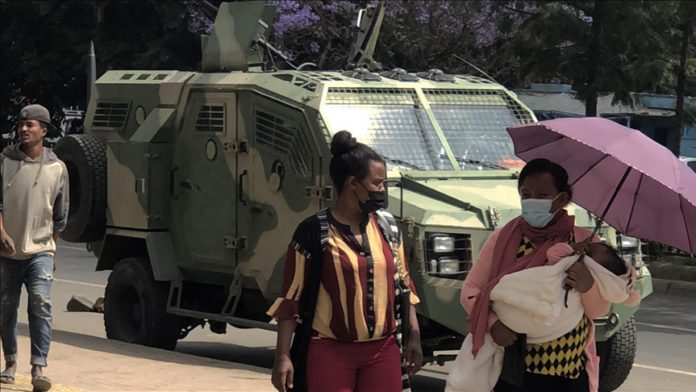 Even four months after the cessation of military operations, Ethiopia’s northern Tigray region bears telltale signs of war, with military vehicles zooming past, endless checking on the roads, and displaced people still pouring in to take shelter in Mekele, the regional capital.

Bordered by Eritrea to the north, Sudan to the west, Ethiopia’s Amhara province to the south, and the Afar region to the southeast, the semi-arid Tigray region on the edge of the northern portion of Jurassic limestone plateau is still witnessing sporadic fighting.

With commandoes and military personnel guarding every corner of the city, checking vehicles and people, fighting looks far from over.

There is continuous arrival of displaced people to Mekele, due to tensions in the interior regions between Amhara and Tigray ethnic groups.

She said the total population in Tigray has now stood at 5.5 million, of whom 700,000 got internally displaced by the current crisis.

The conflict in the region was triggered after Tigray People’s Liberation Front (TPLF) fighters attacked an army base on Nov. 4 last year, killing soldiers and taking away sizable arms and ammunition.

Responding to the attack, Prime Minister Abiy Ahmed declared full-scale military operations that led to the seizure of the area by the federal forces.

Just two weeks ago, fearing for their lives 577,000 people were uprooted from their habitats in the western part of Tigray. Out of these 270,000 are living in makeshift camps in Shirre town, while others are languishing in Axum and Adwa towns.

As many as 11,455 displaced persons have been camped in eight schools in Mekele.

Sheltered at the Hawelti Secondary School among other 2,000 displaced people Solomon Haileselassie, 30, said he has been separated from his wife and an eight-month-old baby. He arrived in the city along with his two daughters of eight and five years of age from the Mai-Kadra in western Tigray.

Speaking to Anadolu Agency, he said after the Amhara forces took over the place, there was fighting that resulted in killings based on the ethnic background of people.

“My 68-year-old father, who is just a farmer, was imprisoned. I came with my mother, sisters, and my three children, “he said.

He also complained that over four months, his family has received the aid of just 15 kgs of wheat, lentils, and edible oil only once.

“We sold the grains to cover our other expenses. We suspect that the food aid coming in our name is being misappropriated. We are not getting any medical support while 50-60 people are living crammed in a single classroom. The people of Tigray from Humera are being dumped at Tekezze River,” he alleged.

Mai-Kadra was one of the major battlegrounds as the area is being contested by the Amhara and Tigray regions. Ahead of the Ethiopian army clearing the area from the TPLF fighters, more than 1,000 ethnic Amhara people were killed by a group called Samre, allegedly financed by the TPLF, according to the Ethiopian Human Rights Commission.

But now people from Mai Kadra like Solomon are accusing the Amhara forces of taking revenge of this massacre from the hapless Tigrayans.

Ashebir Agezo from Mai-Kadra has taken shelter with his two children and wife. For him, security is more important than food.

“I do not care if the government gives us food or not. That is not my priority. I call on the government to stop Tigray people from being killed,” he said.

The Communication Officer Etenesh said the government has so far distributed emergency aid to 4.2 million people in the region.

More than 825,123 quintals of food (wheat) have been distributed out to the needy, most of whom have been affected by the recent armed confrontations, she said.

She said there was no shortage of supplies, but admitted that there could be irregularities in the distribution of relief.

A statement from the prime minister’s office stated in March that the international humanitarian organizations including UN specialized agencies such as the World Food Program have been participating in the relief operations in the Tigray province. The statement further said the government was providing 70% of humanitarian assistance, while the remaining 30% was coming from the aid agencies.

On Tuesday, a Cargo Plane belonging to Samaritan’s Purse an international relief group landed at the Mekele Airport with 2,000 emergency shelters for displaced families.

Speaking to Anadolu Agency, Nick Bechert, Samaritan’s Purse official said that 35,000 metric tons of nutritional package, which is enough for 18,000 children for one month have also arrived. He added that his organization has distributed the aid to people in Mekele, Adigrat, and Shirre towns.

Gone with the Wind: A true Hollywood legend passes away