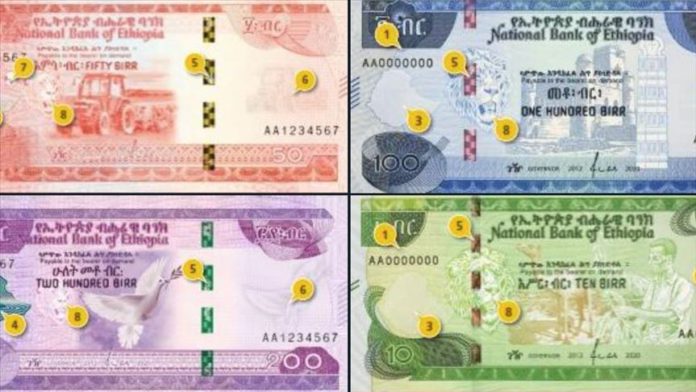 Ethiopia on Monday demonetized its currency but gave three months window to people to exchange old currency notes from the banks.

“Introducing the changes in our currency notes was deemed necessary to salvage the country’s fractured economy,” the prime minister told a gathering that included ministers, bank governors, and heads of the security agencies.

During the three-month window, both the new and old notes will remain in circulation.

The notes of 100, 50, and 10 denominations will stand canceled after three months, as they have been replaced with new notes. Abiy said the new currency with its better design, security features, and quality of paper will have more longevity and end the menace of counterfeiting.

A new currency note of 200 denomination has also been introduced.

In his presentation, Governor of the National Bank of Ethiopia, Yinager Dessie said the newly introduced banknotes will help the country to end hoarding, counterfeiting, corruption, and other ills.

Ethiopia earlier passed directions that any company or an individual can keep cash only up to 1.5 million birrs ($41,000). The cash withdrawal from banks should also not exceed 100,000 birrs ($2,737).

Prime Minister Abiy said his government took numerous measures since coming to power in April 2018 to salvage the fractured economy.

“We inherited a situation where the country had not enough money to make payments for the civil servants,” he said, adding the country had a significant budget deficit and more than the sustainable level of debt.

He further said that over past two years, his government has brought down sovereign debt from 35% to 25% of country’s GDP.