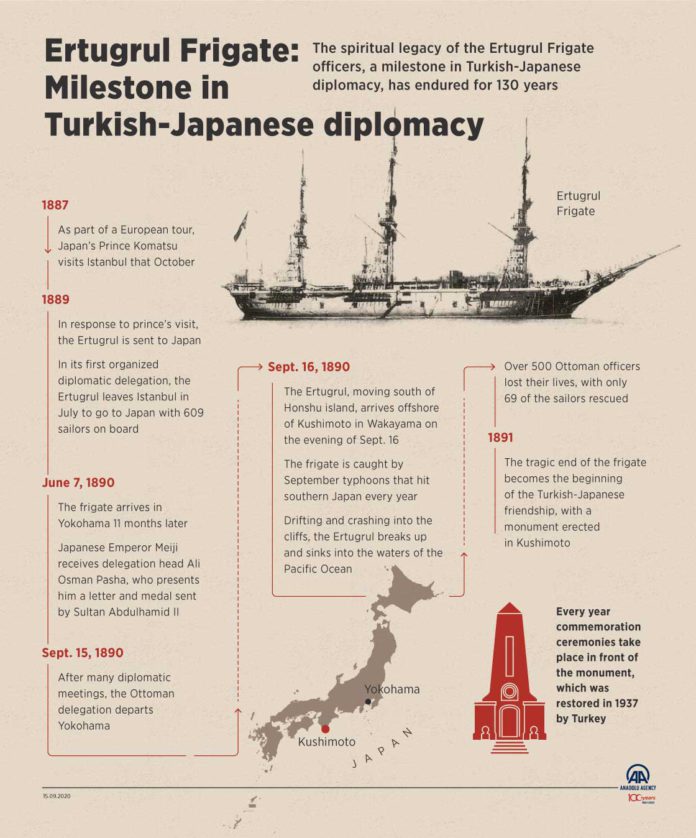 130 years have passed since the shipwreck of the Ertugrul Frigate in the southeast of Japan, a heartbreaking incident that is considered the beginning of Turkish-Japanese friendship.

In response to the visit of Prince Komatsu of Japan to Istanbul in October 1887, Ertugrul Frigate was sent to Japan in July 1889.

The Head of the Delegation Ali Osman Pasha was received by the Japanese Emperor Meiji, and presented the letter and medal sent by Abdulhamid II to the emperor.

The bond was formed during the Ottoman era, when the Ertugrul frigate carrying 609 sailors paid the first organized diplomatic delegation from the Islamic World to Japan.

The frigate left the city on September 15, 1890 but was caught by the September typhoons that affected southern Japan every year.

When it sank off the coast of Wakayama Prefecture in 1890, on its way back home form goodwill voyage to Japan, the incident, resulted the loss of 533 sailors and officers, including Rear Admiral Ali Osman Pasha of Ottoman Empire.

However, Japan’s rescue efforts and the support shown to survivors sealed the friendly ties between the peoples of both nations.

Japanese villagers in Kashinozaki rescued 69 Turk sailors, who were transported back to Istanbul, aboard the Japanese corvettes Kongo and Hiej.

A monument for the martyrs was erected in 1891 in Kushimoto, where the accident took place.

Turkish Embassy of Tokyo said on Twitter that the Commemoration Ceremony of the Ertugrul Martyrs will be held on the anniversary of the accident, on Wednesday in Kushimoto.

The story of the Ertugrul frigate is considered the starting point of relations between the Turks and Japanese.

The tragic legacy of Ertugrul, the milestone of Turkish-Japanese friendship, is kept alive at the memorial ceremonies held annually at the monument.

Naito Masanori from Doshisha University’s Global Studies Institute pointed out that great efforts of the Kushimoto villagers, who tried to save the wounded soldiers in the accident, is the basis of the Turkish-Japanese friendship relations.

Almost a century later the sinking of the Ertugrul Frigate, a large number of Japanese citizens stranded in Tehran during the Iran-Iraq war in 1985 was transported by Turkish Airlines (THY) which is another milestone of Turkish-Japanese relations.