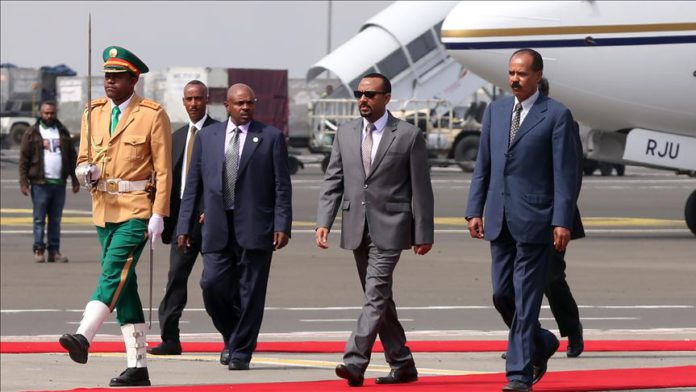 Ethiopian Prime Minister Abiy Ahmed was at Jimma Airport to welcome his Eritrean counterpart as the latter landed in Jimma – a city filled with history and is rich in natural resources including coffee and honey.

The leaders of the two countries will hold extensive consultations on further enhancement of bilateral ties as well as the consolidation of regional cooperation, Gebremeskel added.

In 2018, the two countries managed to end a two-decade long hostilities following the olive branch extended by Abiy.

That successful gesture, together with other efforts to bring about regional peace and cooperation, earned the Ethiopian premier the 2019 Nobel Prize for Peace.

The two countries in 2019 signed a comprehensive cooperation pact in which they agreed to cooperate in numerous fields but little came out in terms of the implementation of the agreements that included the clause that allows Ethiopia to use the ports of Assab and Massawa.

Eritrea seceded from Ethiopia in 1993 following a three-decade long war for independence. The two countries fought a deadly war between 1998 and 2000 in which an estimated 70,000 people died on both sides.

Most COVID-19 deaths in Indonesia now among unvaccinated