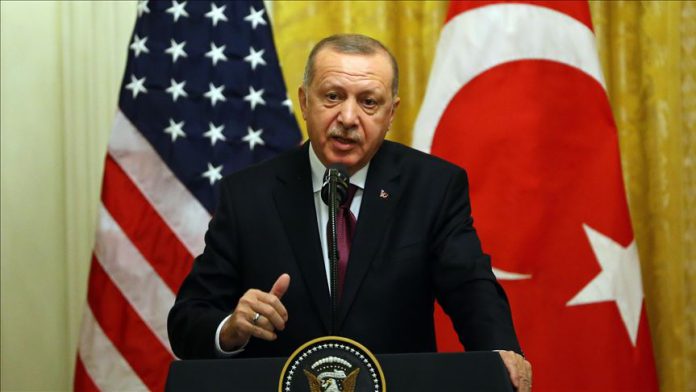 Turkish President Recep Tayyip Erdogan said Wednesday he returned a letter by his U.S. counterpart that threatened Ankara over its anti-terror operation in northeastern Syria and bemoaned Washington’s treatment of the YPG/PKK terror group’s leader.

“I presented the letter to Mr. President and especially felt sorrow that a U.S. president took a terrorist called Ferhat Abdi Sahin as an addressee,” said Erdogan during a press conference with Donald Trump in Washington.

Sahin, also known as Mazloum Kobani, is the ringleader of the PYD/YPG, the Syrian offshoot of the PKK terror organization. Trump repeatedly praised the terrorist leader and said he looks forward to seeing him.

Erdogan said Sahin has caused the deaths of hundreds of Turkish people and is the adopted son of Abdullah Ocalan, the jailed leader of the PKK terrorist organization.

“That the U.S., which we call our strategic partner, welcomes such a person actually saddens us. Likewise, this person is welcomed by Russia. It is hard to comprehend this within the scope of the fight against terrorism across the world,” said Erdogan.

The letter Trump sent to Erdogan on Oct. 9 threatened Turkey with economic devastation if Ankara proceeded with its operation in northeastern Syria. It was also widely criticized as rude and ill-written.

Erdogan also said he submitted some CIA documents which suggested that Sahin is a terrorist.

“The CIA also documented him as a terrorist and they sent us these documents, and then we presented them to Mr. President today. We also returned the letter likewise,” Erdogan added, without elaborating how the intelligence organization provided the documents to Ankara.

On Oct. 17, the U.S. and Turkey came to an agreement to pause the operation to allow the withdrawal of terrorist YPG/PKK forces from the planned safe zone, where Ankara wants to repatriate millions of Syrian refugees it is currently hosting.