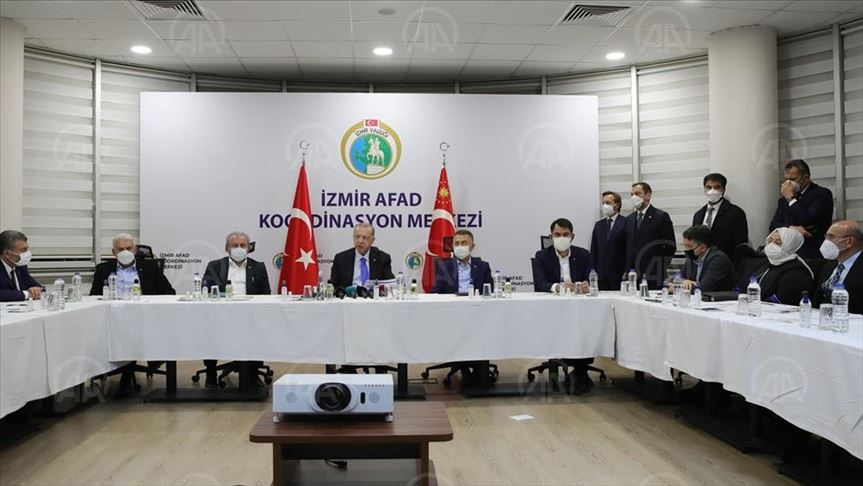 Turkey’s President Recep Tayyip Erdogan said Saturday that new homes will be built ‘soon as possible’ for those whose houses were destroyed in an earthquake in Izmir.

He conveyed condolences to victims of the magnitude-6.6 earthquake in the Aegean province while attending the ordinary Congress of the ruling Justice and Development (AK) Party in eastern Turkey.

Erdogan said at the moment of the quake Friday, all ministers, parliament members, institutions, Turkish Red Crescent, Disaster and the Emergency Management Authority (AFAD) ran to rescue Izmir with all means.

He said Turkey is under a dangerous earthquake zone from the easternmost to the westernmost.

-The world is experiencing pain of transitioning to new era

“Wars that resulted in the deaths of hundreds of millions of people in the previous century were spent with the pursuit of democracy and freedom, as well as colonial activities with no moral boundaries,” said Erdogan.

Western countries, which portray themselves as the cradle of democracy and freedom, immediately relapsed in the first serious crisis of fascism, racism and xenophobia, he said.

“Those who encourage people who they see as cheap labor force to work for years to come to their countries from different geographies are now closing their borders against asylum seekers,” said the Turkish president. “Those who try to defend the ugliness displayed against the prophet of a religion and the ruler of a country under the cover of freedom, mostly harm the concept of democracy.”

Erdogan said it was painful to watch the road set out as European values, defending the most common insults against the symbols of other beliefs and societies.

“Every insult against the Prophet targets all Muslims,” he said.

Erdogan emphasized the government is keeping the economy alive against troubles caused by the coronavirus pandemic and attacks of others.

He said 40 billion lira cash support would be given to citizens in need and that the government implemented unprecedented credit and tax incentives to continue production, keep artisans and craftsmen alive and improve exports.