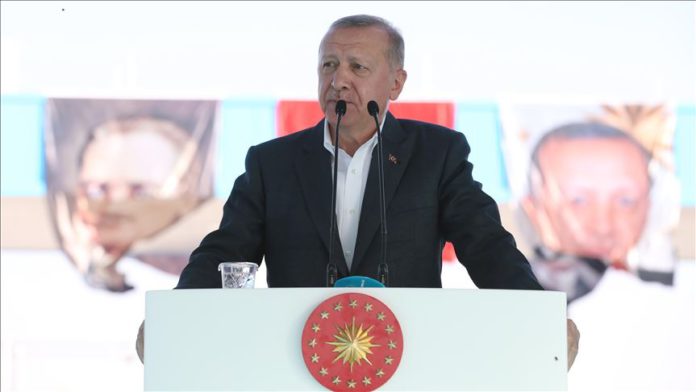 Turkey on Friday marked the 101st anniversary of the Sivas Congress, a milestone on the Republic of Turkey’s road to independence.

“On the 101st anniversary of the Sivas Congress, we express once again that our nation, which does not accept mandate and patronage, will protect this heavenly piece of land as a whole and will never let it divide,” President Recep Tayyip Erdogan said in a message.

Erdogan said planning for the war was done at the congress in which Turkey declared that it will never submit to the occupying forces.

“The decisions taken at the Sivas Congress played an important role in the determination of the National Oath, the opening of the Grand National Assembly of Turkey, all the phases of the War of Independence and the foundation of the Turkish Republic,” he said.

He went on to say that Turkey has always stood against the threats targeting its flag, homeland and independence with unity and solidarity.

Erdogan remembered all of the fallen soldiers and Mustafa Kemal Ataturk, the founder of the Republic of Turkey, with respect and gratitude.

“On the anniversary of the Sivas Congress, where the foundations of our independence were laid, I commemorate Mustafa Kemal Ataturk and all congress members with mercy and gratitude,” Turkish Vice President Fuat Oktay said on Twitter.

Turkish Parliament Speaker Mustafa Sentop also sent a telegram to the governor of Sivas province marking the anniversary of the congress.

Omer Celik, the spokesman for the ruling Justice and Development (AK) Party, said on Twitter that the spirit of independence is still fresh and alive as it was in the Sivas Congress.

“With the motto of ‘Mandate and patronage are unacceptable’, only our nation has a say in our country, especially in the Eastern Mediterranean,” Celik said, adding that his country will uncompromisingly protect its mainland and Blue Homeland.

Ataturk gave the directives about the Sivas Congress and went to Erzurum to gather a congress on June 28, 1919. He came back to Sivas on Sept. 2 and stayed there until Dec. 18.

A group under Ataturk’s leadership laid the basis of the foundation of the Republic of Turkey on Sept. 4, 1919, in the building known today as Ataturk Congress and Ethnography Museum.

According to records, during the seven-day congress, various proposals were discussed for the liberation of the nation, and it ended on Sept. 11, 1919, with the publication of a final declaration.

“Either independence or death,” Ataturk said about the principles reached by the congress.