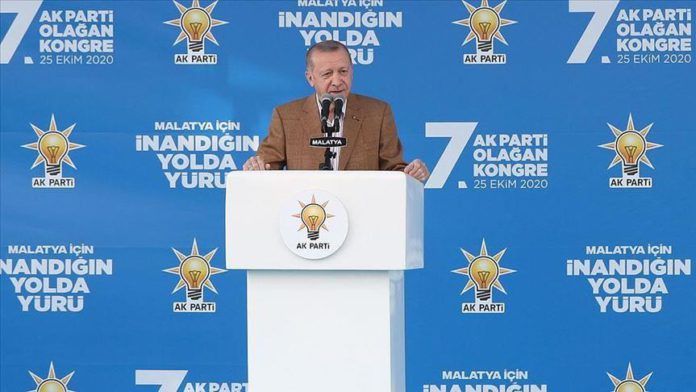 “Fascism is not in our book, it’s in your book. Social justice is in our book,” Erdogan said at a meeting of his ruling Justice and Development (AK) Party in the eastern Malatya province, calling Wilders a “fascist.”

“The forces that make the world uninhabitable have put us on the target board because we disrupt their games and reveal their true faces,” Erdogan said, adding: “We will carry on.”

His remarks came after Wilders, known for his anti-Islamic stance, shared on Twitter an insulting cartoon of the Turkish president that was denounced by several Turkish officials including Foreign Minister Mevlut Cavusoglu.

“When truth spoken to their faces Europe’s loser racists showed up again. Trying to exploit Islamophobia and xenophobia. Time has come to stop Europe’s spoiled politicians with fascist mindset,” Cavusoglu said on Twitter.

“Immoral, antihuman and fascist…,” said AK Party spokesman Omer Celik on Twitter in response to the post, along with the hashtag #TerroristGeertWilders.

“Europe is an increasingly dangerous place for Muslims. The dog whistle politics of offensive caricatures, accusations of separatism against Muslims, and mosque raids isn’t about freedom of expression,” Altun warned.

June 12, 2020
We use cookies to ensure that we give you the best experience on our website. If you continue to use this site we will assume that you are happy with it.Ok