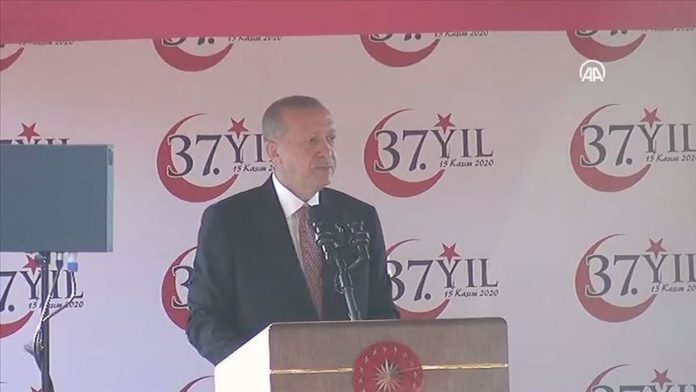 A two-state solution needs to be negotiated in Cyprus on the basis of sovereign equality, Turkey’s president said on Sunday.

“There are two different people and two separate states in Cyprus. The 2-state solution needs to be negotiated on the basis of sovereign equality,” said Recep Tayyip Erdogan, speaking at a ceremony on the Turkish Republic of Northern Cyprus’s (TRNC) 37th anniversary.

Turkish Cypriots are the only victims in the Cyprus issue and have been ignored for years as their rights were usurped, Erdogan stressed.

Ankara’s priority is to reach a sustainable solution in Cyprus and ensure the legitimate rights and security of Turkish Cypriots, he added.

On the recent partial reopening of the abandoned town of Maras in the Turkish Cypriot city of Gazimagusa, Erdogan said this step was meant to eliminate existing grievances, not create new ones.

The abandoned town of Maras in Gazimagusa, also known as Famagusta, partially reopened for public use on Oct. 8.

Maras had so far been a ghost town to which entry was forbidden, except for Turkish army personnel stationed in the TRNC.

Turkish parliament's head due in Azerbaijan for talks