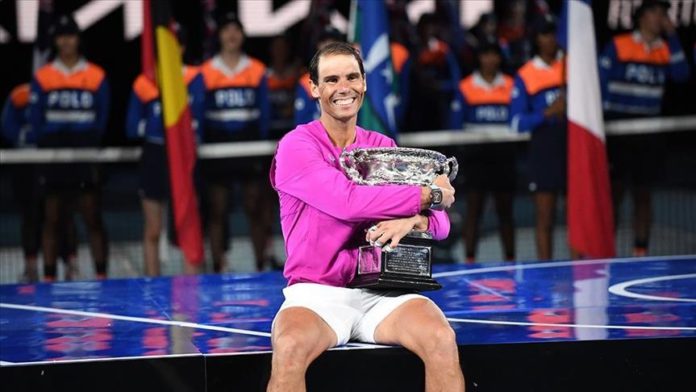 Rafael Nadal passed Novak Djokovic and Roger Federer to seal the record for the most Grand Slam singles titles in men’s tennis history.

With a sensational comeback win over Daniil Medvedev in the 2022 Australian Open final on Sunday, Nadal secured his 21st Grand Slam title.

The Spanish legend previously won the Australian Open in 2009.

He became the fourth athlete to win the most Grand Slams in total.

Margaret Court sits at the top of the list with 24 championships, while Serena Williams has won 23 victories and Steffi Graff is third with 22 trophies.

Federer and Nadal were both 20-time Grand Slam winners.

Ken Rosewall was 37 and Roger Federer was 36 when they bagged Australian Open titles.

Nadal had lost 4 straight finals in Australia until 2022

Nadal, Djokovic and Roger Federer were all level on a men’s record of 20 Grand Slam singles titles each before Nadal made history in Australia 2022.

After losing to Djokovic in the final, Swiss legend Federer missed his chance to win the 21st title in the 2019 Wimbledon.

Djokovic also failed to clinch his 21st grand slam title by losing to Medvedev in the 2021 US Open final.

The Serbian player was not allowed to participate in the tournament after his visa cancellation was upheld by a three-member bench of the Federal Court.