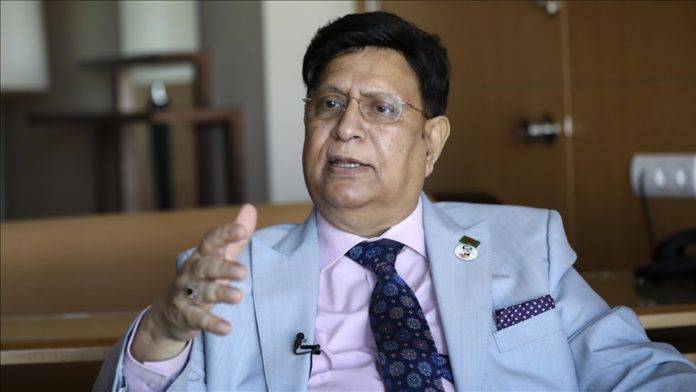 In the wake of constant concerns of international communities and rights defenders over the safety of Rohingya refugees on a remote Bangladeshi island, the South Asian country has expressed willingness to arrange a tour for foreign diplomats to the new relocation site so they can observe the “better” condition there, first-hand.

But, the overseas envoys stationed in the delta country, which is hit by natural disasters every year, want a full-fledged assessment by international experts under the supervision of the UN about the feasibility of the island before any such tour, while a refugee expert also opined the same.

“Bangladesh government has nothing to hide. Rohingya would be in Bashan Char despite negative campaigns by some interest groups. Those Rohingyas that have moved to [the island] are very pleased to be there,” Momen said.

In the fourth phases, Bangladesh, which hosts more than 1.1 million Rohingya, has relocated above 10,000 members of the persecuted community to the distant island, popularly known as Bhasan Char, a term synonymous with “floating island” despite international concerns.

The island, born in the southern sea of the Bay of Bengal two decades ago, is reportedly prone to natural disasters, and before developing the Rohingya rehabilitation project, there was no human habitation.

Terming Bhasan Char as the world’s first “island prison” for a persecuted nation, many international rights watchdogs, including the Human Rights Watch, have urged Bangladesh to halt the relocation move.

Dhaka, however, has argues that the island is safe and protected and that the Rohingya people currently living in the crammed makeshift tents in the country’s southern district of Cox’s Bazaar would have a better life there with sufficient livelihood opportunities.

Underling the Rohingya’s plight, Momen urged the world community not to pay heed to any propaganda and extend services to the persecuted people on the island.

“Once UN agency signs its ToR [Terms of Reference] to serve them [Rohingya], they are welcome to start their service and operations in Bashan Char.”

He also confirmed to Anadolu Agency that “many NGOs are currently serving in Bashan Char and a few countries have donated assistance to the persecuted Rohingya there.”

Claiming that the relocation would be “life-saving” for the Rohingya, Momen added that Bangladesh’s initiative would set an example before the world.

“Foreign ambassadors and diplomats who are willing to visit Bashan Char are most welcome, including UN agency members,” Momen said, adding that “this is a model in the world that, even for persecuted displaced people, the Bangladesh government wants decent and safe living conditions, even temporarily.”

The Bangladeshi government has constructed 1,400 big cluster houses four feet above the ground with concrete blocks and 120 multi-storied cyclone shelters on the island. Each cluster house is made up of 16 rooms.

Spending over $350 million from its domestic resources, the Muslim-majority country has developed a resettlement project on 13,000 acres for temporarily resettling 100,000 Rohingya Muslims who fled persecution in their home country Myanmar.

According to Amnesty International, more than 750,000 Rohingya refugees, mostly women and children, fled Myanmar and crossed into Bangladesh after Myanmar forces launched a crackdown on the minority community in August 2017, pushing the number of persecuted people in Bangladesh above 1.2 million.

Early this month, the heads of five diplomatic missions, including the US, UK, EU, Japan and Canada, expressed concern over the Bhasan Char Rohingya rehabilitation project in a meeting with Bangladesh’s Home Minister Asaduzzaman Khan Kamal in Dhaka.

Speaking to Anadolu Agency, the Turkish envoy in Bangladesh, Mustafa Osman Turan, said: “Turkey will be one of the first countries to go to Bhashan Char island after the UN visit to assess the situation there is conducted.”

“We hope that the UN visit to Bhashan Char will take place soon,” he said, adding that Bangladesh has been “very generous to Rohingyas and developed a very good reputation in the eyes of the international community. This must continue.”

Underlining Turkish support for Bangladesh in the Rohingya crisis, Turan said Ankara is willing to extend its support to the Rohingya on the remote island after a clean sheet by the UN. “We also want to support the Rohingya relocated in the island of Bhashan Char.”

Speaking to Anadolu Agency, the Japanese ambassador to Bangladesh, ITO Naoki, also focused on the UN assessment of the island.

He said: “The process of relocating Rohingya refugees to Bashan Char is another huge effort made by Bangladesh to accommodate Rohingya refugees, and it is important to make the process accountable to secure UN involvement and international support.”

The envoy of the Asian country, also a strong ally of Myanmar, however, laid emphasis on the sustainable repatriation of Rohingya to their home country.

“It is also essential for Myanmar to create an environment conducive to an early repatriation of Rohingya refugees, and Japan spares no effort to facilitate the process working together with Bangladesh, Myanmar as well as other international organizations.”

Without assessment, envoys tour to be futile

Meanwhile, international relations professor and refugee expert C R Abrar opined that any initiative for the tour of diplomats to the island without the experts’ feasibility study or assessment would not have any significant results.

“Envoys are not experts on the island. So, their visit to Bhasan Char does not carry any significance. For the safety of Rohingya, the assessment test on the island with experts is most important,” Abrar told Anadolu Agency.

Criticizing Bangladesh’s relocation of Rohingya to the island without meeting the UN demand for a feasibility study, Abrar said: “Without making any more delay, Bangladesh should immediately conduct an independent and international standard assessment on the habituation of the island.”

Relocated Rohingya on the island, however, want to have livelihood facilities as Bangladesh committed before shifting them.

“We have not come [Bhasan Char] here permanently; we want to return to our homeland Myanmar. Until then, we want safety and dignified life here through livelihood facilities,” Mohammad Ansar, a Rohingya youth in the island, told Anadolu Agency. 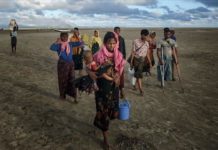