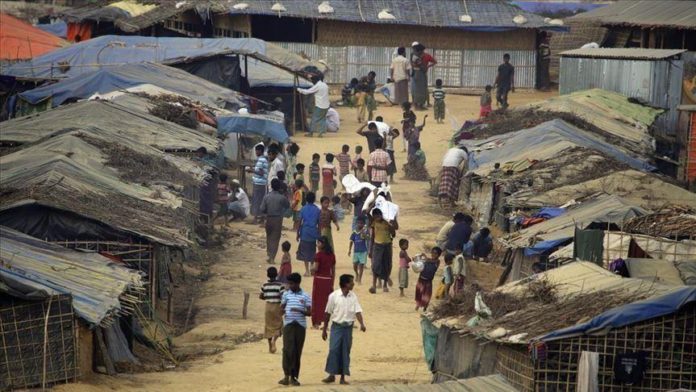 Ten foreign diplomats based in Dhaka on Saturday visited a remote Bangladeshi island to see the Rohingya refugees who have been relocated there by the host country, an official statement said.

“The objective of the visit was to provide the Ambassadors with an opportunity to witness the massive development and humanitarian projects undertaken by the Government of Bangladesh,” said the statement issued by the Bangladesh’s Foreign Ministry.

The first-ever trip to the island by foreign heads of missions was preceded by a UN team’s visit between March 17-20, said the statement, adding that “during the tour, the group had the chance to visit different infrastructures including embankments, buildings, shelters, other facilities, and amenities available on the island.”

A team, led by Youssef Aldobeay, assistant secretary general of the Organization of Islamic Cooperation, also went to Bhashan Char days after the UN visit.

The group of diplomats from Turkey, the EU, US, UK, France, Germany, Japan, Australia, Canada, and the Netherlands also spent some time with the Rohingya children in an informal learning center on the island.

Meanwhile, a Rohingya from the island told Anadolu Agency that the diplomats accompanied by members of the Bangladesh Navy and other officials visited them and asked about their living conditions.

“We replied to them that we are in a better environment here than that of in congested settlements in Cox’s Bazar,” said the Rohingya man preferring not to be named.

He added: “We are not allowed here to move freely. We hope that the Bangladeshi government will allow us to move freely on the island and permit us to do livelihoods as we were committed before shifting here.”

Some Rohingya refugees underscored the need to expand learning facilities for children and provide them with opportunities for farming and fishing which would help in keeping them active.

Referring to the demand of the Rohingya on the island, the Foreign Ministry statement added that the diplomats “visited several capacity-building projects such as sewing, handicrafts making etc.”

The skills the Rohingya are acquiring at the distant Bangladeshi island will help them “to utilize on their return to Myanmar,” according to the statement.

Bangladesh is currently the host of more than 1.2 million Rohingya mostly fleeing a brutal military crackdown in Myanmar’s Rakhine state in August 2017 and have taken shelter in the world’s largest refugee camps in the southern district of Cox’s Bazar.

Citing the living condition at the cramped mainland camps as risky for Rohingya, one of the world’s most persecuted people according to the UN, Bangladesh started relocating them to its southern distant island of Bhasan Char in December 2020, and so far 18,334 members of the community have been shifted.

The government has a plan to relocate, in phases, 100,000 Rohingya to the island, claiming the floating island is safe and secured with the settlements developed by Bangladesh.

The South Asian country has developed 1,400 big cluster houses four feet above the ground with concrete blocks and 120 multi-story cyclone shelters on the island spending $350 million to relocate Rohingya there on a temporary basis until peaceful repatriation of the persecuted people to their home country.

International communities and rights bodies have been opposing the move as risky to Rohingya without conducting any professional feasibility study on the habitability of the island that was reportedly prone to natural disasters and was never used as human habitation earlier.

Referring to the interaction between Rohingya and visiting diplomats, the statement, however, said: “The Rohingyas conveyed their high satisfaction over the existing facilities in Bhashan Char, which they considered safe, secured, crime-free compared to the congested camps in Cox’s Bazar.”

Meanwhile, the stateless people expressed their willingness to return to their homeland in Myanmar. “I want my children to grow with their own national identity in their own country,” the statement said, quoting a Rohingya as saying.