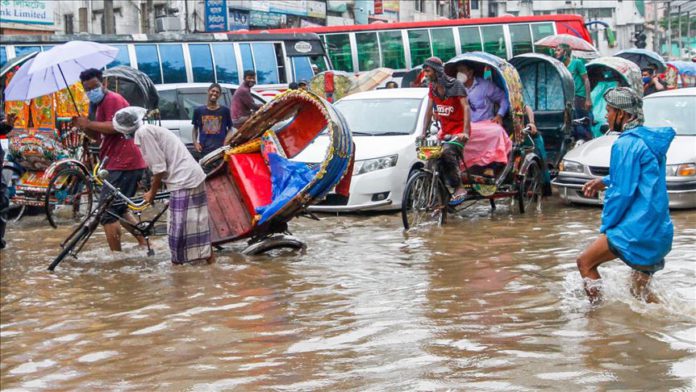 Numerous environmental disasters occurred across the world in the month of July which included forest fires in Ukraine, a storm in Russia, landslides in Myanmar, Nepal, China and many flash floods caused by heavy rains.

Here is a timeline compiled by Anadolu Agency

Powerful floods affect over 1.4 million people in the state of Assam, northeast India, according to the country’s disaster authorities.

At least 110 miners are killed in a landslide, caused by heavy rain, at a jade mine in the state of Kachin, northern Myanmar, according to the country’s emergency services.

At least eight people are killed and more than 2,300 homes are damaged in flash floods in several parts of Mongolia, the country’s emergency department says.

Forest fire in eastern Ukraine kills four and injures nine others, while 110 homes are destroyed, according to the country’s emergency service.

Tornado kills one, injures two others in Otter Tail, central Minnesota in the US, local media reports.

Hundreds of children are evacuated from a summer camp in south-central Greece after a forest fire breaks out, according to the authorities.

Landslides, caused by heavy monsoon rain, kill at least 60 people and leave over 40 missing in Nepal, according to officials.

At least two people are killed and 11 others injured after heavy rain in Turkey’s Black Sea region triggered by floods.

Tens of thousands of residents are left without electricity, as a severe storm and heavy rain hits western Russia that causes declaring state of emergency in Saratov’s St. Petersburg area.

At least 15 die and 4,000 people are affected after flash floods in South Sulawesi, Indonesia, according to reports.

At least two people die in southern Italy from floods, according to the Italian ANSA news agency.

At least six people are killed in landslides caused by heavy rains in Kaizhou district of Chongqing municipality, China’s southwest.

At least 62 people die in Bangladesh due to floods caused by monsoon rains and an onrush of river waters from upstream India, says the government.

Forest fire which breaks out in northwestern Turkey burns around two hectares of forestland (5 acres) and around eight hectares (20 acres) of agricultural land.

With over 80 people dying in floods in northeastern India and 2.4 million people feeling the impact, more than 100 animals, including 11 one-horned rhinos, also die at Kaziranga park in Assam state, according to officials.

Some 37,000 people are affected by flash floods on the southeastern coast of Somalia, according to disaster management officials.

At least 20 people are killed and several others injured in various torrential monsoon-caused incidents in Pakistan’s eastern Punjab province.

Wildfires in north California, US, burns more than 23,000 acres areas over a couple of days.

The death toll in Bangladesh’s floods increases to 119 with eight more fatalities in the last 24 hours, officials say.