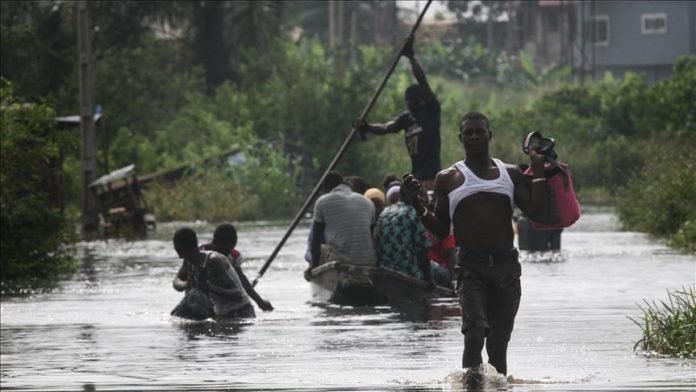 The year 2020 saw many environmental disasters that have fueled climate change and vice versa across the world, including tropical storms, hurricanes, landslides, and deadly floodings caused by heavy rains.

Thousands of people have been killed and millions of more have been displaced due to these disasters as well as states of calamity announced in different countries.

The following are the major global environmental disasters of 2020 compiled by Anadolu Agency:

– Flash floods in Jakarta, Indonesia in the early hours of the first day of 2020 after overnight rain dumps nearly 400 millimeters of rain, leaving at least 66 dead, and displacing 60,000 in the worst flooding in the area since 2007.

– At least 41 people are killed in two days in Pakistan due to heavy snow.

– Deadly heavy rain and floods kill thousands of people, displace more than 30,000 others in southeast Brazil.

– The worst of Storm Ciara abates in central Europe after near-hurricane winds have battered the region while Scandinavian countries, as well as Switzerland, France, Belgium, Ireland, the Netherlands, and Germany continue to experience downpours and high winds.

– At least 19 people die in the US state of Tennessee as a result of a heavy tornado that also causes major damage to buildings, roads, bridges, utilities, and businesses.

– The death toll in Rwanda rises to 53 from floods caused by heavy rains over the past two months. The floods destroy over 800 houses, damage 23 roads and 17 bridges, and nearly 500 acres of agricultural land.

– A strong storm in the southern Mersin province of Turkey destroys tens of thousands of almond trees.

– More than 700,000 people in different parts of Zambia are affected by floods that also leave many people in 28 districts in need of relief food.

– The Department for Environment, Food and Rural Affairs (Defra) warns that much of southern England and Wales will be hit by high levels of air pollution in the month.

– Indonesia’s Anak Krakatau volcano, between Java and Sumatra islands in Lampung province, erupts, spewing ash columns up to 500 meters (1,640 feet) above the craters.

– The death toll from flooding in the eastern Democratic Republic of Congo rises to 40.

– Authorities in Afghanistan warn that more than 7 million people are still at risk as at least 56 people die from severe flooding over the past weeks.

– Thousands of people are displaced and affected by flooding and mudslides in Arusha and Kilimanjaro regions, northern Tanzania, over the last past days.

– A dam partially collapses due to heavy rain in eastern Uzbekistan, affecting 70,000 people. The waters wash away hundreds of houses.

– Heavy rainfall caused by Typhoon Vongfong in Samar Island in the Philippines destroys homes and displaces over 140,000 people.

– Cyclone Amphan, which forces displacement of 3 million people in India and Bangladesh, claims at least 88 lives.

– The death toll from floods pounding the East African nation of Kenya rises to 285. Nearly one million people are affected, announces the government.

– At least 63 people are killed or missing, while nearly half a million people are displaced, as heavy rains continue to lash southern China.

– Three Gorges Dam in China, the world’s largest dam, is at risk of collapse amid historic floods that also put more than 400 million people’s lives at risk.

– A huge cloud of Saharan dust moves from Africa over the Atlantic Ocean and darkens the skies over parts of the Caribbean.

– At least 83 people are killed in lightning strikes in India’s eastern state of Bihar, as monsoon storms hit the country.

– At least 110 miners are killed in a landslide caused by heavy rain at a jade mine in the state of Kachin, northern Myanmar.

– Landslides caused by heavy monsoon rain kill at least 60 people and leave over 40 missing in Nepal.

– Tens of thousands of residents are left without electricity as a severe storm and heavy rain hits western Russia, forcing a state of emergency to be declared in Saratov’s St. Petersburg area.

– With over 80 people dying in floods in northeastern India and 2.4 million people feeling the impact, more than 100 animals, including 11 one-horned rhinos, also die at Kaziranga park in Assam state.

– At least 119 people die in Bangladesh due to floods caused by monsoon rains and an onrush of river waters from upstream India.

– Landslides and floods caused by heavy rains kill at least 30 people in Suleja city and Gwagwalada area in the Nigerian capital Abuja.

– At least 49 people are killed in a massive landslide in the southern Indian state of Kerala.

– The first typhoon of the season lands in South Korea and is on its way northeast.

– Death toll from floods caused by heavy rains in Yemen rises to 174.

– Death toll from flooding in Turkey’s Black Sea province of Giresun rises to 11.

– At least 50 artisanal miners are killed when a gold mine collapses in the eastern Democratic Republic of Congo due to landslides caused by heavy rains.

– Hurricane Sally makes landfall on the US Gulf Coast, bringing life-threatening flooding to parts of the Florida panhandle and Alabama.

– At least 31 people are killed and more than a dozen are missing in rain-related incidents in Vietnam and Cambodia.

Oct. 14:
– At least 15 people are killed in the south Indian state of Telangana due to incessant rains.

– At least 39 people die, thousands displaced in flooding in Cambodia.

– Vietnam mobilizes at least 250,000 troops and 2,300 vehicles to combat Typhoon Molave, the “worst storm” facing the country in at least two decades.

– One person dies due to a partial tsunami in Izmir’s coastal district of Seferihisar following a magnitude 6.6 earthquake shaking Turkey’s Aegean region.

– At least 3,300 homes in Napier, New Zealand are hit by floods, landslides and power outages caused by the heaviest downpour in the country in 57 years.

– Tropical Storm Eta heads to the north of the Yucatan Channel after killing at least 200 people in landslides in Central America and the Caribbean.

– The number of people killed in flooding caused by Typhoon Vamco rises to 53 in the Philippines.

– At least 17 people are killed, 12 others injured and over 10 remain missing after days of heavy rain causes floods and landslides in northwestern Colombia.

– Cyclone Gati which makes landfall in late September dissipates but rains from the deadly storm continue to pound different towns.

– Record-breaking rainfall hit the Croatian city of Split, causing traffic chaos and flooding homes and businesses as 118.8 mm (4.6 inches) of rain is registered by the country’s meteorological department.

– At least 68 people die from flooding in various parts of Nigeria this year, while no less than 129,000 are affected.

– A major winter storm dumps more than 3 m (9.8 feet) of snow in parts of Italy and Austria and more than 770 mm (30 inches) of rain in the town of Barcis in northern Italy.

– Heavy rain-caused flooding continues to negatively affect lives in several provinces of Iran as at least seven people are killed due to 160 mm (6 inches) of rain, equivalent to two months’ worth of rain in the country.

– Italy’s historic city of Venice is left partly underwater after a flood defense system does not work on time due to a mistaken weather forecast.

UN agencies warn of significant threat to life in Libya