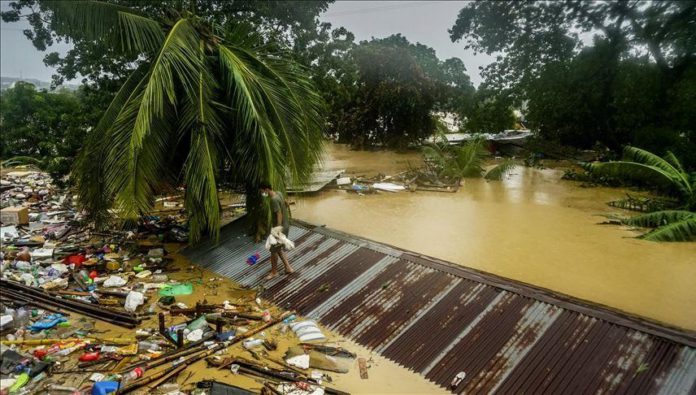 November saw a host of global environmental disasters, including floods in Mexico and typhoon gales in the Philippines, as well as forest fires in Algeria and storms in Central America and Somalia.

Here is a timeline compiled by Anadolu Agency.

– At least 17 people die and tens of thousands of others evacuated to safer areas due to the ongoing typhoon in the Philippines, according to state media.

– A miniature tsunami hits coastal areas in Turkey after being triggered by an earthquake in the Aegean Sea, according to the head of Bogazici University’s Kandilli Earthquake Research Institute.

– Two people in Algeria are killed in forest fires west of the capital Algiers, according to the civil defense agency.

– Thousands of homes are damaged by flooding in southern Mexico after heavy rains that started at the beginning of the week pelted the state of Tabasco.

– At least 3,300 homes in Napier, New Zealand are hit by floods, landslides and power outages caused by the heaviest downpour in the country in 57 years.

– Tropical Storm Eta heads to the north of the Yucatan Channel after killing at least 200 people in landslides in Central America and the Caribbean.

– About 11,500 people are forced to leave their homes since late October as a result of flash floods in Chad’s capital N’Djamena, according to the International Organization for Migration (IOM).

– Four children die and two others are injured in a mudslide in India’s Bhopal city, according to security sources.

– Authorities in the Philippines warn that destructive winds and torrential rains triggered by Typhoon Ulysses in the main island of Luzon could generate volcanic sediment flows, also known as lahars.

– At least two people are killed and four more missing as strong typhoon winds hit the Philippines’ Bicol region, according to the country’s Office of Civil Defense.

– Volcanic activity on Mount Merapi in Central Java remained high since authorities raised its status to Level III on Nov. 5, according to the Geological Disaster Technology Research and Development Center (BPPTKG).

– The number of people killed in flooding caused by Typhoon Vamco rises to 53 in the Philippines.

– Hurricane Iota, labeled as a Category 4 and “extremely dangerous,” make landfall on Nicaragua’s coast, announces the US’ National Hurricane Center.

– At least 17 people are killed, 12 others injured and over 10 remain missing after days of heavy rain causes floods and landslides in northwestern Colombia.

– Meteorological experts in the Horn of Africa report that the deadly Cyclone Gati, which made landfall in Somalia, is finally dissipating.

– As India’s COVID-19 cases cross the 9.2 million mark with over 44,000 new infections so far, the country’s southern coast is bracing for the approaching Cyclone Nivar.