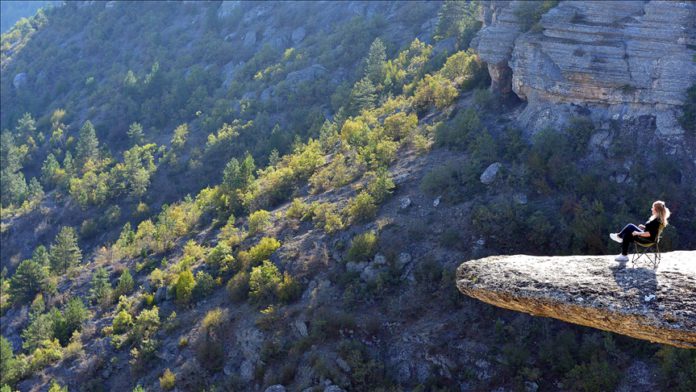 Turkey has enacted many green policies this year to protect the environment and slow down climate change, closing dirty thermal power plants and establishing government offices to oversee further such steps.

Here are the environmental developments compiled by Anadolu Agency in 2020:

More than 1 million electric vehicles are estimated to be on the country’s roads by 2030, Donmez says in an interview with Anadolu Agency.

Turkey’s revered Grandpa Earth Hayrettin Karaca, who was also the co-founder and honorary president of one of the country’s foremost non-profit environmental organizations, dies at 97.

Turkey aims to reduce national greenhouse emissions by up to 21% by 2030, says an official from the country’s Ministry of Environment.

The Agriculture and Forestry Ministry launches the country’s most comprehensive campaign in its history to develop indigenous seeds that are resistant to disease.

After arriving in the Antarctic on Feb. 18, Turkey’s polar expedition team returns to Turkey.

For World Water Day, Turkey’s main opposition Republican People’s Party (CHP) releases a report on water use and resources in the country, calling for a new water law.

Migratory birds on their south-to-north route benefit from lockdown measures against the novel coronavirus in Turkey, according to the Izmir-based Doga Association.

The Ministry of Environment issues a circular on wastewater management as part of measures against the COVID-19 outbreak.

Levels of airborne particulate matter in 29 metropolitan areas of Turkey drop by 32%, according to data compiled by air quality measurement stations and municipalities.

Turkey announces it will plant a Health Heroes Memorial Forest in each of its 81 provinces to honor health workers’ efforts against the pandemic, with over 1 million saplings to be named after the country’s healthcare professionals.

Environmental engineers in Turkey reveal a report on air pollution in the country in 2019 that stresses that at least 75 million Turkish citizens were exposed in that year to polluted air.

Turkey detects as many as 71 endemic plant species in its Salt Lake, or Tuz Golu, basin in the central province of Konya.

The head of WWF Turkey calls for “COVID-19-like measures” against the climate crisis and loss of biodiversity as “human health relies on healthy nature,” in a World Environment Day statement.

Record-high temperatures are reported in May across 63 points in Turkey, meteorological data show.

Turkey breaks a 20-year record as the country produces 66% of its total electricity from renewable resources in April, says Energy Minister Donmez.

Multiple record holder free-diver Sahika Ercumen of Turkey dives into the Bosphorus Strait in Istanbul to raise awareness on plastic pollution in the seas.

Turkey launches the Environment, Nature and Animal Protection Branch Directorate, which will focus on wildlife protection, under its Interior Ministry.

By recycling hazardous waste and preventing the cutting of 3,648 trees in 2019, Turkish Airlines saves 63 football fields of soil, the national carrier says.

Official meteorological data shows that the most common natural disasters in Turkey in 2020 are heavy rains and flooding with 332 incidents, followed by storms with 257.

To support domestic production, 11 million square meters (4.2 square miles) of Treasury land was leased to citizens in January-July 2019 and the same period in 2020 for forests to be planted, Turkey’s environment minister says.

Environmental activists in the Fethiye district of Mugla province, collect two tons of waste in two hours as part of a cleaning campaign.

A Green Party is founded by Emine Ozkan and Koray Dogan Urbarli in Turkey with the slogan: Our house is on fire! We will put out this fire!

At an informal meeting of environment ministers in Berlin, Turkey’s Murat Kurum says the COVID-19 proved the importance of a sustainable environment for human health.

A “forest school” is established in Turkey’s Black Sea province of Samsun to raise environmental awareness in elementary school students.

Record-high temperatures are recorded by 93 centers across Turkey in September, a Turkish meteorology expert at Istanbul Technical University says.

Turkey is all set to plant saplings over 50 hectares [124 acres] of land in the southern Hatay province, says the country’s agriculture and forestry minister.

Speaking to Anadolu Agency, Burcu Ozsoy, the head of the first Turkish Polar Research Center (PolReC) says: “Not wars, but climate change will change the world map in the 21st century.”

Amid ever-rising concerns surrounding climate change and environmental degradation, the Turkish Exporters’ Assembly (TIM) seeks to raise awareness on the European Green Deal, according to the body.

Over 199,000 — the highest number to date — loggerhead turtle hatchlings reach the sea in specially protected environmental areas in Turkey.

Turkey expresses its determination to achieve a “fair position” in the international regime to combat climate change in an addendum statement to the G20 Leaders’ Summit Declaration.

Iran to scale down further commitments to nuke deal