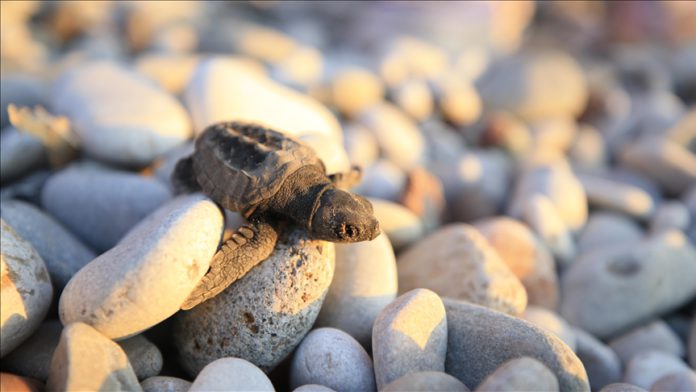 The hatching process of baby turtles has gained the attention of visitors in world-famous Iztuzu beach in Turkey’s Aegean province of Mugla.

The caretta caretta loggerhead turtle hatchlings crawled into the sea from the Iztuzu beach, which is an important nesting area for this endangered species.

The hatchlings of caretta carettas, which are among the creatures at risk of extinction in the world, are produced with great care, as a local rescue and rehabilitation center helps those that cannot make it to the sea.

After a day in the rehabilitation center, the young turtles are released into the sea after sunset. Those interested in seeing the procedure requires prior approval from the center, said an official.

Yakup Kaska, the center’s director, told Anadolu Agency that there have been hatchlings from 20 nests so far, and the nesting is still going on.

There are 600 nests at the time and this number will increase to 750, he estimated and added that approximately 35,000 turtles are expected to hatch by the end of the season.

The turtles that come out of the nest are about 4-5 centimeter (1.5-5 inches) long, he informed. The hatchlings that fall into the holes dug by humans on the beach cannot reach the sea, and even human footprints may change into an insurmountable pit for a youngster, he added.

Stating that the hatching starts in July and will continue until the end of September, Kaska asked the people on the coast to be careful in the areas where the caretta caretta nests are located.

Turkey to open museum dedicated to Mehmet the Conqueror