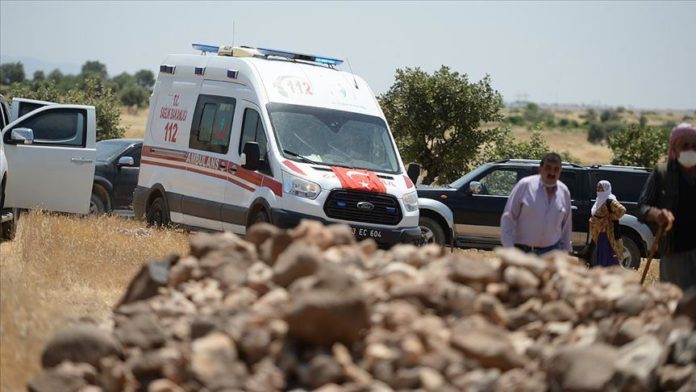 The PKK terrorist group, which targets civilians and innocents, has been dealt a heavy blow by the successful operations of the Turkish security forces both at home and abroad.

Turkey’s security forces, which are destroying terrorist shelters one by one, day and night, are continuing in their efforts to ensure the security of the Turkish people and the country’s borders.

Despite challenging conditions, the Turkish Armed Forces have managed to neutralize senior terrorists.

In addition, the PKK has nearly come to an end through Turkey’s persuasive efforts which have resulted in the surrender of many of its members.

Despite all this, the embattled terrorist group does not hesitate to target civilians.

An attack this week in the southeastern Sirnak province is among the latest atrocities committed by the PKK in its decades of terror campaigns against Turkey, with infants and senior citizens among its victims.

On May 14 also this year, two social workers delivering aid amid the novel coronavirus outbreak were killed in a bloody PKK attack in the eastern Van province.

The incident occurred in Ozalp district when gunmen opened fire with rifles, also wounding a bystander.

On Sept. 12, 2019, roadside explosives planted by the terror group hit a vehicle carrying forest workers in the village of Agackoyu in Kulp district, killing seven civilians and injuring 10.

On July 15 last year, 8-year-old Ayaz Guloglu and his 4-year-old sister Nupelda were killed in a land mine explosion carried out by PKK terrorists in the eastern Tunceli province. The incident is an example of how the PKK indiscriminately targets civilians in Turkey through gunfire or bombings.

Killing of mother and child

On July 31, 2018, Nurcan Karakaya traveled by car with her 11-month-old child to Yuksekova district in Hakkari province to visit her husband, Serkan Karakaya, a soldier who was stationed there.

On her way back home, a roadside bomb exploded, killing them both.

On March 7 of the same year, the terror group’s firing squad killed a total of eight people, including six children.

In its attempts to seize land in the region by spreading fear, the PKK did not hesitate to kill those who opposed the terror group.

The year 1987 went down in history as one marked by massacres of the PKK.

On May 9, 1987 in a village of the Nusaybin district in Mardin, the terror group killed 11 people, including eight children and two women.

On July 8 of the same year, PKK terrorists struck a village in Midyat district and killed nine people from the same family — two women and seven children.

On Aug. 18 of that year, terrorists targeted Eruh district in Siirt and killed 25 people, including two infants. Notably, 14 of those massacred were below the age of 18.

The PKK terrorist organization continued its massacres in the 1990s and the following years without discriminating between security forces and civilians.

On March 21, 1990, terrorists blocked a road in Kovancilar district in the eastern Elazig province and the terror group’s firing squad killed nine engineers and a laborer.

In the same year, the terrorists attacked the village guards’ houses in the Guclukonak district in Sirnak and killed 27 people, including 12 children and seven women.

The terrorist organization, which also carried out civilian massacres in metropolitan cities, threw Molotov cocktails at a store in the Bakirkoy district of Istanbul on Dec. 25, 1991.

On July 14, 1991, PKK terrorists raided villages in the Caglayancerit and Pazarcik districts of the southern Kahramanmaras province and killed nine people, including women and children.

The PKK struck a village in Sirnak on May 23, 1992 and killed four people, including two women and two children.

On June 22, 1992, PKK members raided the village guard’s house in a village in Gercus district of Batman province and murdered 10 people. A one-month-old child was among those killed in the attack.

The terrorist organization, known for its hostility to religion, raided a village mosque in the Silvan district of the southeastern Diyarbakir province on June 27, 1992, killing 10 people.

In the same year, the PKK killed 12 civilians in the Hani district in Diyarbakir, including four children and four women.

On May 24, 1993, the terrorists blocked the Bingol-Elazig highway in the country’s east and killed 33 unarmed soldiers who were traveling to their military units by bus.

The terror group’s firing squad killed a total of 33 civilians in the Basbaglar village of the eastern Erzincan province on July 5, 1993 and set the village on fire.

The PKK continued its massacres in the same year, killing 24 people in Van, 14 of whom were children.

On the first day of 1994, the terrorist group stopped a passenger bus in the Maden district of Elazig and shot eight people.

On Sept. 11, 1994, six teachers were shot by terrorists in Mazgirt district of Tunceli.

PKK terrorists attacked the Hamzali village of Diyarbakir’s Kulp district on the first day of 1995, killing 20 people, including women, children, and the older adults.

Six teachers working in Tunceli were shot by terrorists on Sept. 11, 1994.

One month after the massacre, PKK members abducted five teachers who were working in the villages of Katranlı and Taskesen in Erzurum and killed four of them.

On July 24, 1995, PKK terrorists raided a village in the Gurpinar district of Van, but they were met with resistance from the villagers. Shortly after, the terrorists attacked houses in the village with rockets, killing 12 civilians and injuring 13 others.

PKK terrorists also raided a mine in the Samandag district of the southern Hatay province on Sept. 5, 1995. The terror group’s firing squad killed nine miners.

The PKK, which suffered heavy losses when facing security forces in the countryside, turned to city centers in the 2000s to create an atmosphere of fear and panic in the society.

The terrorist organization, which started targeting civilians in city centers with suicide bombings, attacked the historical Spice Bazaar, one of the most crowded places in Istanbul, on July 9, 1998. Seven people died and 121 were injured in the explosion.

The capital Ankara also became the target of the PKK. In a suicide bomb attack in Ankara on May 22, 2007, nine people were killed and more than 100 civilians were injured.

On July 27, 2008, two bombs planted by the PKK exploded in the Gungoren district of Istanbul, and 18 civilians, including five children, were killed and 154 were injured.

On Aug. 5, 2012, PKK terrorists killed three villagers in the Menemen district of the western coastal province of Izmir. Two days later, they also attacked a vehicle carrying military personnel in the Foca district of the province. In the attack on Aug. 7, 2012, two soldiers were martyred and 25 people were injured, including civilians.

In October 2014, the opposition Peoples’ Democratic Party (HDP) called on people to take to the streets, which triggered massive clashes with security forces. Two police officers along with 31 civilians lost their lives while 221 civilians and 139 police officers were wounded.

Among those killed were Yasin Boru, a 16-year-old boy, and two of his friends who only wanted to deliver sacrificial meat to neighbors and poor families.

Thirteen-year-old Firat Simpil left his home on Aug. 30, 2015 to buy vegetable and fruit for his family in the Silvan district of Diyarbakir, but a roadside bomb exploded, and killed him.

On Sept. 28, 2015, the terrorists attacked a police car with rockets. Elif Simsek, 9, was killed after her house was targeted by the PKK.

Muhammet Fatih Safiturk, the district governor of Derik in Mardin, died in a hospital following a bomb attack by PKK terrorists on his office a day earlier, on Nov. 10, 2016.

PKK terrorists detonated a bomb-laden truck in the village of Durumlu in Diyarbakir’s Sur district, reportedly following an argument with a group of villagers who spotted the vehicle and began chasing it. The blast killed 16 people and injured 23 others on May 12, 2016.

On June 9, 2017, a PKK attack killed 22-year-old music teacher Senay Aybuke Yalcin as she was returning home from school in Kozluk district in Batman province.

Another 23-year-old teacher, Necmettin Yilmaz, became the victim of a PKK attack on June 16 of the same year.

His vehicle was torched by PKK terrorists in Pulumur district of Tunceli, while his body was recovered on July 12 near the Pulumur Stream.