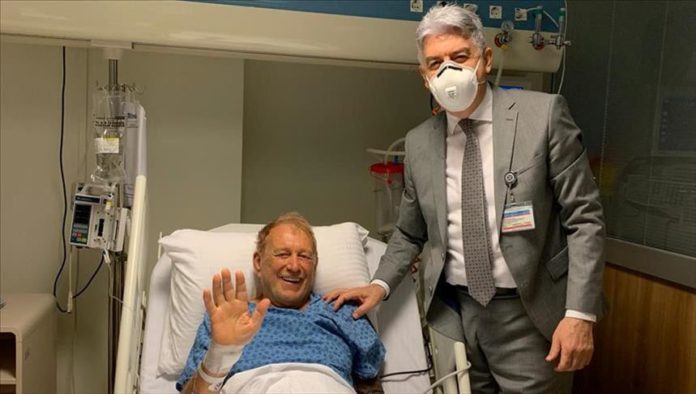 According to the statement made by the hospital, the patient, who supposed to have a tricuspid valve, had two, admitted to the hospital having respiratory problems and being exhausted quickly.

After diagnosed with aortic valve regurgitation, Schweighart could not return to Germany due to the COVID-19 pandemic. After searching for a doctor, the 76-year-old got treatment in Turkey’s Medipol Mega University Hospital, upon advice by a British friend of his.

The TAVI operation lasted for an hour, resulting with the patient recuperate.

Quoted in the statement made by the hospital, Prof. Boztosun said “The patient admitted to our hospital having respiratory problems and being tired quickly. We diagnosed him having a bicuspid valve, instead of having a tricuspid. The bicuspid aortic valve is congenital heart disease. Avoiding the risk, we used the TAVI operation instead of open-heart surgery. The patient recovered well.”

Boztosun said every 1-or-2 out of 100 people is born with a bicuspid aortic valve and advised the community to have their hearts checked regularly.

“TAVI is rather a comfortable operation. Open-heart surgeries are not performed for patients over 75 years old. After TAVI operation, the patient can be able to eat in several hours, get his/her movement in a couple of hours. After a week of rest, the patient can go back to normal life,” he said.

– ‘I heard of Medipol via a British friend of mine’

Gunther Schweighart, the patient, said he was in Turkish Republic of Northern Cyprus for business and had trouble breathing.

“I thought I had a chest disease. I told my problems to a British friend of mine. My friend heard about Medipol via Dr. Erhan Celiker, a doctor he knows. He advised me Medipol and said I could trust the doctors in there. At first, I was very worried and angry about my problem, I was afraid of being paralyzed. Because of COVID-19, I did not think of returning to Germany. I come to Turkey and Medipol Mega. Doctors here accompanied me. My operation lasted for an hour and after that, everything was fine again.”

Schweighart said he has two children and four grandchildren, mentioning he would like to visit Turkey with his family.

“I will spend more time with my family. I am working with Turks, they are genuine and sincere people. Doing business and living with Turkish people make me feel comfortable. They are trustworthy and hospitable. I am happy that I was treated here.”