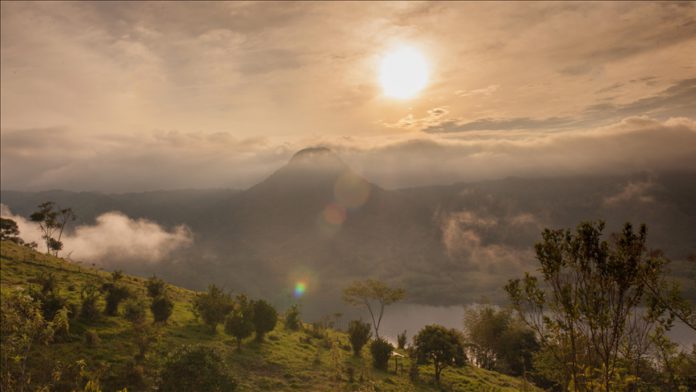 Paramilitaries led by Ovidio Isaza, alias Roque, burned the village of El Congal, a small town in the municipality of Samana, Caldas department, in western Colombia, on Friday, Jan. 18, 2002.

Armed men of the Farmer Self-Defense Forces of Magdalena Medio arrived between 5 p.m. and 6 p.m. to the hamlet hidden in the Colombian coffee-growing mountains and set everything on fire.

It happened during confrontations between paramilitaries and the then-Revolutionary Armed Forces of Colombia (FARC) guerrillas because of a territorial dispute. The area was commanded by alias Karina, considered the most feared woman of the former rebel group. It was where young people recruited in the area were trained and also cases of extrajudicial executions, known in the Andean country as “false positives” were recorded.

“Before 2002, the village was productive. We lived in complete harmony, but the illegal armed groups arrived,” said Eliecer Londono Cardona, president of the Community Action Board and leader of El Congal, as he pauses and cries. “Telling this story is hard. They destroyed everything, they displaced not only this village but five more villages. They told us we could not be here, and we had to go out with what we had in hand. We left to the town of Florencia.”

Londono Cardona told Anadolu Agency that at least 30 families, including his, were displaced to different parts of the country. “Some went to Medellín, others to Bogota, Manizales. I was in different departments. The last one was in Meta,” he said, from the site of a previous school.

Images of pregnant women, mothers with four or five children in hand and the elderly running, stunned by fear, remain in the collective memory of the hidden population in the middle of the coffee mountains.

Jose Rael Echeverry, another resident of El Congal who stayed in his house for four years despite threats, recounted his experience with deep sadness.

“The day they came to burn down the village, it was a nephew of mine” who warned us. “We were already threatened. The boy was going to a little farm down there called La Palma … and he felt something strange. He looked ahead and saw a large armed group — then he saw AUC (United Self-Defense Forces of Colombia),” he said, drawing with his hands the direction of the roads his nephew was traveling.

“Fortunately the boy was not seen. What did he do? Well, he turned around and came here, he was sick of running. He told us: There are the paramilitaries, and there are many of them, let’s go away! Immediately, all the people took a little blanket, a little panela (unrefined whole cane sugar), threw their hen into a bag. I lived far away,” he said while pointing toward the lower part of the mountain. “Some 50 or 60 people came to my house.”

Rael Echeverry said around 7 a.m. on Saturday “shots were heard at the top” on the mountain. “We thought about running to a place that we had when there was a lot of confrontation. Then everything was silent when we saw a column of black smoke. We wondered what was wrong. Well, they were burning the hamlet! Then smoke came out of another house, another and another.”

Now in his 60s, with a poncho over his shoulder and leaning against a white wall in his new house, he said paramilitaries tried to burn houses with people inside. “As they found the doors closed, they thought that the people had not gotten up. What did they do? The first thing was gasoline at the doors, in order to burn people in,” he said.

Fortunately, no one was inside. But everything was reduced to ashes and when they were able to return, residents found only “embers and the twisted zinc sheets.”

After trying their luck in various parts of Colombia for years, and hoping to return to their longed-for land, at the end of 2014, the first 17 families made a request to the Land Restitution Unit, which filed a lawsuit in 2015 to specialized judges. In December 2016, a land restitution judge ruled in their favor.

Nineteen years later after the burning, Colombia gave land rights to the families so they can rebuild their lives. And on April 16, with the presence of entities in charge of the comprehensive reparation process, the former residents took formal delivery of compliance with judicial rulings issued that ordered comprehensive reparation.

It translates into 80 hectares (198 acres) titled to the 17 families, their homes, the cadastral updating of land, as well as a school equipped for the community, health center, drinking water plant, one for wastewater treatment and electrical energy.

The court order was complied with by using 520 million Colombian pesos ($142,994) to invest in productive projects, technical and labor training, preparation of a historical memory report and a monument to honor victims of the conflict and a 4-meter (13-foot) obelisk in which difficult moments residents of El Congal lived are reflected.

Samana was the municipality that was most hit by violence in Caldas and one of the hardest hit in Colombia. But now, a safer territory has been delivered to the local population.

On April 5, the last destruction of an unexploded ordnance was carried out in El Congal. In other words, the area is already free of suspicious mines.

Lieut. Col. Andres Noval, commander of the Humanitarian Demining Engineers Battalion No. 3, said in El Congal there are currently 59,739 meters (37 miles) cleared of explosive devices. “Ninety-five artifacts including antipersonnel mines and unexploded ordnance have been destroyed,” he said.

But there is what is called a residual risk — the possibility that returning populations may find an artifact. Therefore, a call is made to notify authorities to avoid a tragedy.

“We have been there from the beginning and we are not leaving until we can provide them with a much calmer environment,” said Noval.

For Noval, Samana is “one of the jewels of humanitarian demining” since operations began 11 years ago.

In the Caldas municipality, there are 721,888 meters (449 miles) free of suspicious mines and 442 antipersonnel mines, 14 unexploded ordnance and two explosive devices have been destroyed, representing at least 558 fewer mine casualties.

Amed Velasquez Ortiz, head of the Human Rights Unit of the Government Secretariat of Caldas, and also a victim of the war, said that “there is no more important return process at the national level or even at the international level.”

“El Congal is a benchmark of what is an effective articulation of entities for comprehensive reparation to victims,” he said. “Of course, the community has played a very important role.”

Sandra Nino, territorial director of the URT (Land Restitution Unit), said that although 100% of court orders were complied with for the first 17 families, it is expected that this year another 24 will benefit.

There are already three cases with final sentences, but there are 21 other processes waiting in the judicial office.

Amed Velasquez said this was the first delivery of homes made by the Agrarian Bank, but it is intended that at least 48 families will be reached.

Between memories and hope

“That was the scariest thing,” a woman told herself in the middle of the event protocols when she saw the story of one of her neighbors projected on a screen. “This was the area where the war hit the hardest … but still, we have to forgive,” Hernan Herrera, a man next to her, murmured to Anadolu Agency as she looked at the images.

What happened at the beginning of 2002 remains fresh in the memory of the people of El Congal. But residents see a possibility to heal the open wound left by the war with the delivery of titles and the fulfillment of promises.

Although the adaptation of the roads, a park and a chapel are pending, for Eliecer Londono, everything that is happening brings them “a lot of tranquility, happiness” and restores their trust in the state “because what happened, happened anyway due to the state’s abandonment.”

The director of the URT, Andres Castro, said: “El Congal is a sign of the national government’s commitment to repairing the victims in Colombia.”

“Today we say with enthusiasm: Justice has been done in El Congal,” he said.

*Daniela Mendoza contributed to this story