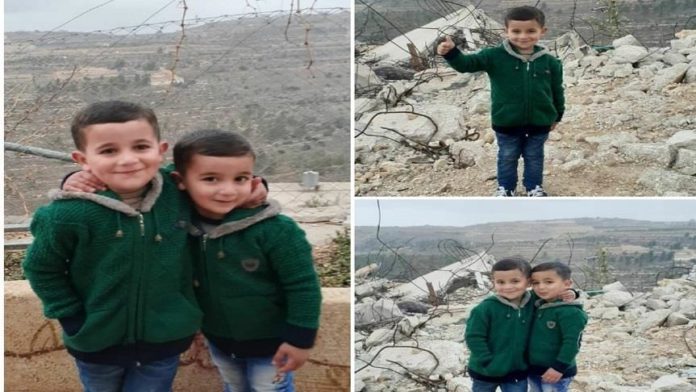 On eve of Islamic festival of Eid al-Adha, coinciding the annual Hajj pilgrimage, a Palestinian family in Beit Kahel, north of Hebron in the West Bank recalls the tragic events they experienced last year on the same day.

Israeli Army stormed Aref Asafreh’s house and arrested his three sons in wee hours, a day after they had celebrated Eid.

“The troops surrounded my house and ordered the family to come in one room, and started interrogating my sons for five-long hours. Then they took Qasem, his wife Enas, and two other sons Ahmed and Mohammad along with and left,” he said. They also confiscated Qasem’s vehicle.

Later Israeli intelligence charged them of killing a former Israeli soldier in the Gush Etzion settlement in the north of Hebron.

Three months later, the Israeli forces returned and destroyed four houses belong to the family, one of them belonging to Qasem and his wife. For the past one year, children Mohammad, 6, and Abdulrahman, 4, are awaiting the return of their parents.

Sitting on the rubble of his house along with brother Saleh, elderly Asafrh said the shock becomes more strident on special days like Eid when children remember and recall the company of their parents.

“They miss the warmth of mother’s lap. They enquire whereabouts of their parents and when will they return. We have no answer,” said Khaleel, Qasim’s brother.

Although the family tries to compensate, the absence of both parents is telling on the minds of children.

Asafreh and his aged wife take care of seven grandchildren, whose fathers are in jails. With their houses blasted by the Israeli troops, they had to run helter-skelter in search of shelter.

“After arresting my sons, the occupation forces arrested three of my nephews. Six men in our family are in jails, he said.

Asafreh and his wife have been able to meet sons only once since they were arrested. Instead of keeping them in a single jail, they have been lodged in different jails across the country.

A few days ago, the family received a letter from Enas, 28, which she had managed to smuggle it out through a released woman prisoner.

“I miss Qasem and our sons these days. I hope to be with them and prepare ourselves for the Eid. I wanted to get them some nice new clothes,” wrote the mother, detained in Damon jail near Haifa. Qasem in Remon jail in Negev desert in the far south.

Speaking to Anadolu Agency, Mohammad Asafrh, brother of Enas said that his sister is suffering from many chronic ailments, most of them because of harsh interrogation that she was subjected to in Ashkelon Interrogation Center.

“She suffers from continuous headaches, colon irritation, and pains in bones as a result of the lack of vitamins, and medical care. But she always tries to be strong and patient”, said Mohammad.

In her letter, Enas asked her family to let her listen to the voice of her sons on the Eid day.

Barred from meeting their relatives and lawyers over the past three months since the outbreak of COVID-19 or coronavirus pandemic, a Palestinian radio station through its voice of prisoners’ program has helped prisoners to keep a connection, as it broadcasts voice messages of their families.

“I am eagerly awaiting evening transmission of FM radio, to hear Mohammad and Abdulrahman,” she wrote.

The children who met once their mother behind the glass panel were shocked to see their mom for the first time, four months after her arrest.

“It was very harmful to see them crying behind the glass panel and unable to hug and calm them. I hope one day I will be able to kiss and hug my sons,” said Enas in her letter.