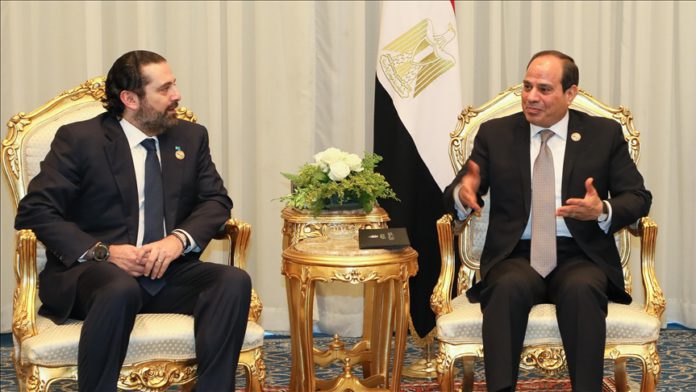 Egyptian President Abdel-Fattah al-Sisi on Wednesday reiterated his country’s support to Lebanese Prime Minister-designate Saad Hariri in his efforts to form a government.

Sisi met with Hariri in Cairo where they discussed the political situation in Lebanon, bilateral cooperation between the two countries and regional developments, the Egyptian Presidency said in a statement.
Al-Sisi reaffirmed Egypt’s “full support to Hariri’s political path which aims to restore stability to Lebanon” and his efforts to address challenges in Lebanon, the statement said.
Hariri, for his part, underlined his country’s appreciation to “Egypt’s vital role as a key pillar for preserving stability” in Lebanon and the region, the statement added.
Hariri also met with Egyptian Foreign Minister Sameh Shoukri who underlined the importance “for all Lebanese parties to prioritize Lebanon’s highest interest over any narrow interests”, according to a statement released by the Egyptian Foreign Ministry.
Lebanon is still stuck in the formation of a new government amid differences between Hariri and President Michel Aoun.
The Arab country is facing a severe economic crisis, with the local currency losing nearly all its value against US dollar. Streets across the country have been blocked by protests and rallies over the crisis, the worst since the country’s civil war.