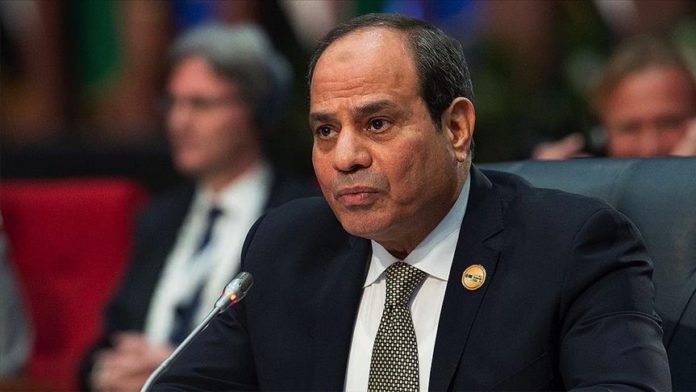 The posts with the Arabic hashtag “Egypt Fights Corruption” attracted great attention of Egyptians. A user named Muhammed Ramadan tweeted: “Al-Sisi, who is supposedly among the people on the streets with protection and although the army belongs to him, he speaks to the cadets of the military academy behind bulletproof glass.”

“The distance between Sisi and the cadets is too far. Shouldn’t the front row group greet the President or something?” Tuna Ali wrote. “Speaking to the cadets of the military academy from behind the bulletproof glass, [on the other hand] al-Sisi coincidentally encounters a taxi driver while cycling on the street. Won’t they put an end to the jobless director who staged this scenario?”

A user named Marko Rusi replied: “No, they will continue with the same director as long as there are idiots who believe in this script.”

A user named Abu Izzeddin said: “The man is speaking to the cadets behind the bulletproof glass. Al-Sisi is afraid.”

Another user named Nureddin said: “Al-Sisi is standing behind a bulletproof glass in the military academy. He has at least 200 meters between him and the cadets. In short: the traitor is afraid. If he is so afraid of the cadets, what does he feel in front of the oppressed people?”

In an earlier footage released to the media, Sisi is seen riding a bicycle in sportswear. He coincidently encounters a taxi driver and greets him. Social media users said that the footage was staged for propaganda and shot by an advertising company.

Notably, Former Egyptian President Anwar al-Sadat was assassinated by military officers during a parade in Cairo on Oct. 6, 1981.

Since then, Egyptian presidents have taken high-level measures at military ceremonies. However, it is stated that this is the first time a president has spoken behind bulletproof glass.