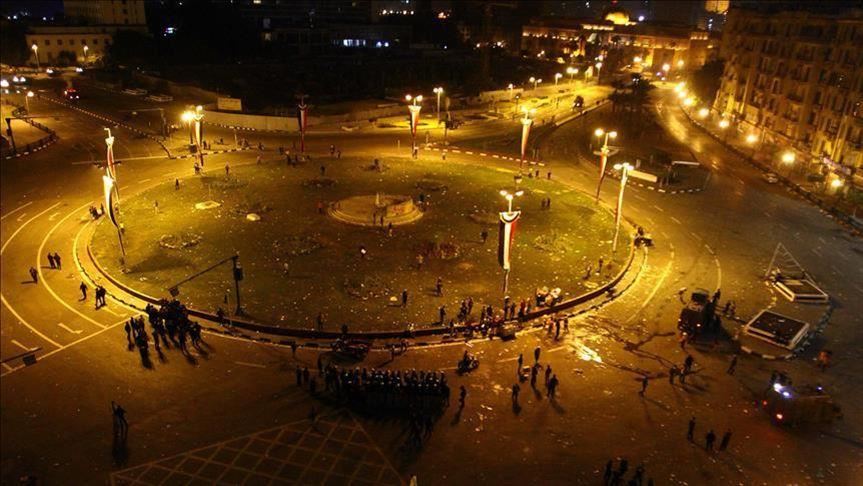 Aug. 14 marks the seventh anniversary of a peaceful sit-in in Cairo’s Rabaa Square by hundreds of supporters of President Mohamed Morsi, protests that ended in a deadly crackdown.

The massacre came weeks after Morsi was deposed by the military as a result of a series of demonstrations against his one-year rule.

At least 817 protesters were killed by Egyptian security forces, according to Human Rights Watch, which described the killings as “systematic” and “one of the world’s largest” in a single day in modern history. Opposition figures put the death toll at around 2,000.

Despite numerous calls for justice by human rights groups, supporters and the families of the victims, justice has not yet been served. It is believed that since the regime considers the protesters “terrorists,” it has no incentive to grant them rights.

Since 2014, Egypt has been ruled by Abdel Fattah al-Sisi, who was the minister of defense during Morsi’s tenure. In one of his statements in 2014, Sisi indicated that the killing of the protesters was premeditated as the state expected demonstrations to happen after Morsi’s overthrow and “was ready for that.”

In another statement in January 2018, Sisi noted that the sit-ins in Rabaa and al-Nahda squares were aimed at attacking security forces and that the reported high death toll of the protestors was “lies.”

The Egyptian government’s narrative about the Rabaa killings has remained along the same lines, which is not surprising considering that the regime’s legitimacy depends on maintaining silence over the massacre.

The Egyptian parliament’s failure to implement a transitional justice law indicates the government’s disinterest in delivering justice to the victims. This is proven by remarks from Osama Heikal, then head of the Culture and Information Committee in the House of Representatives and current minister of information, who described the adoption of the law as “impossible.”

The reason, he argued, is because the law calls for a national reconciliation process which includes the disbanded Muslim Brotherhood.

In contrast, the Egyptian parliament in July 2018 approved a law barring future criminal prosecutions of army commanders for any acts committed between July 3, 2013 and June 8, 2014 without the approval of the Supreme Council of the Armed Forces, which is headed by Sisi.

The move killed off any hopes that the current regime will deliver any justice after having ironically acquitted former President Hosni Mubarak and some of his top officials of the killing of protesters.

Why then does the call for justice persist?

According to a report by Anadolu Agency, the call for justice continues, despite little hope in achieving it. It is made annually through the media to protests to increase international awareness over the plight of the Rabaa victims, hoping to pressure Egypt to implement the transitional justice law.

Basically, annual media campaigns and protests, particularly in Western countries, that demand the probing of the killers are aimed at keeping the cause for justice “alive.”

Meanwhile, the human rights campaigns have collected hundreds of statements related to the Rabaa killings but have yet to open an international inquiry into the killings of the demonstrators. Calls by Human Rights Watch for an independent international investigation have been futile.

While efforts to keep the call for justice alive have continued, the lack of coordinated actions among those seeking justice for the victims means that the endeavor has not gained significant success. For instance, while some supporters have approached the International Criminal Court, others have approached the African or European human rights courts, making their efforts ineffective.

Certain legal obstacles have also impeded the delivery of justice for the victims. First, the Egyptian regime is not a signatory to any agreements in this context, so the arrest of officials in other countries is not possible. In addition, pursuing legal action in Egypt is not an option, considering the environment of fear Sisi created since he came to power.

Second, the call for justice has been monopolized by groups and individuals affiliated with the Muslim Brotherhood, presenting the issue as a battle between the regime and a specific group. This limits the number of supporters for justice, so there is a need to expand the circles to include anyone who believes in fighting for the rights of the victims.

In sum, the supporters of the Rabaa victims perceive the current regime as the main obstacle towards achieving the long yearned for justice. In contrast, the Egyptian regime’s survival is based on denying responsibility for the killings and obstructing any call for legal action, thus putting the two parties in a “zero-sum battle.” We should, therefore, expect the calls for justice for the victims of the Rabaa massacre to endure.

*Ibrahim Mukhtar contributed to this story from Ankara

Canadian sports step up to plate to protest US shooting