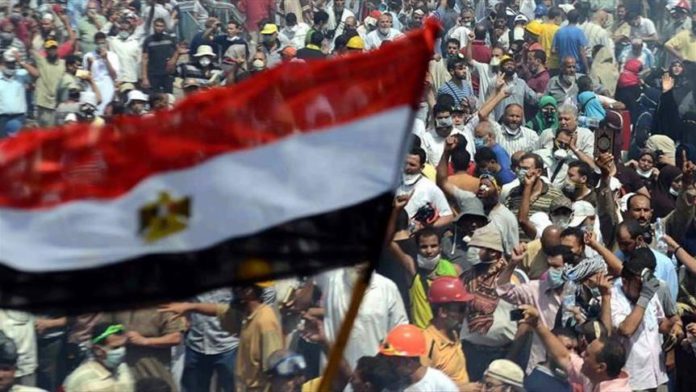 Sandwiched between security crackdowns and lack of leadership, the Egyptian public is taking to streets across the country since Sept. 20, following calls by activists and opposition members demanding the resignation of President Abdul Fattah al-Sisi.

While there have been conflicting reports about the size and spread of protests, political analysts agree that they have posed a significant challenge to the political regime.

Official media outlets have described protests as “very limited” while others sympathetic to opposition say, they are massive and are “breaking the fear barrier”.

The Arab Foundation for Civil Society Support (AFSS) — a humanitarian organization that has been monitoring the protests — has documented 164 protests in 14 out of 27 governorates from Sept. 20-27 in which hundreds, including children, have been arrested.

The group stipulated that the reason for the outbreak of protests is the absence of participation in decision-making.

A report published by the group further said that other reasons for public anger are continuing nationalization of parties, trade unions, and civil society, limited political freedom, the domination of state agencies over parliament, and the continued imprisonment of thousands of prisoners of conscience, and deteriorating living standards.

“Not only the Muslim brotherhood are absent from being an active actor in the public sphere but also all secularist movements and parties as well,” he said.

But he said the real challenge to current resistance is that Egyptian opposition leaders living abroad, both Islamists and secularists have failed to agree on common minimum principles to work together for achieving a goal to overthrow the regime.

Opposition not learning from failures

“The opposition has failed to learn from their failures,” he said, adding that he does not see any immediate hope as long as the leaders, who have not changed for over seven years now continue working with the same methodology.

The brute repression against protesters also hinders them achieving and bringing a real change, said Eid.

Egyptian security forces have launched random searches and arrests, which included checking phones of pedestrians randomly for photos of the protests.

“The security forces have rounded up hundreds of demonstrators, including 68 children who were later released, while at least 150 demonstrators were investigated by the State Security Prosecutions on terrorism charges on Sept. 21,” the AFSS report said.

Three people have been killed by police during anti-regime protests in Al-Jiza, according to Egyptian activists and media outlets.

“Despite peaceful demonstrations, the Interior Ministry killed three people in Al-Iyad [in Al-Jiza],” Egyptian businessman and dissident Mohamed Ali, who lives in Spain, claimed on Twitter.

No statement from authorities has been issued yet about the killings and arrests.

“For the current situation, all I am expecting is the formulation of community activism in achieving their claims,” said the Egyptian researcher.

Sisi came to power in Egypt in July 2013 after deposing the country’s first democratically elected president, Mohammad Morsi, in a military coup.