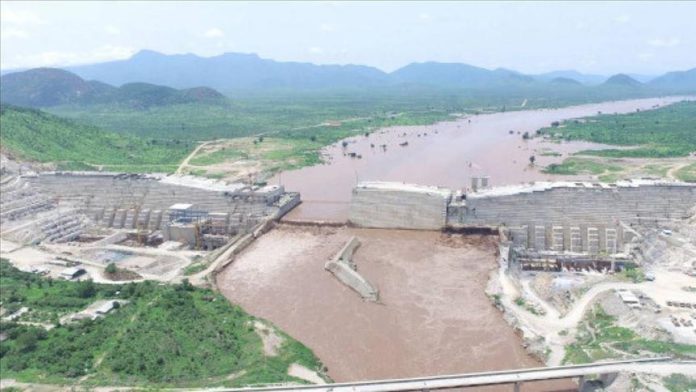 Egypt and Sudan on Tuesday called Ethiopia’s announcement of a new stage of work on its Nile dam a “serious escalation” that shows its bad intentions and desire to impose a fait accompli on the two downstream countries.

Meeting in New York ahead of a UN Security Council session set for Thursday, Egyptian Foreign Minister Sameh Shoukry and his Sudanese counterpart Maryam Sadiq al-Mahdi “expressed their categorical rejection of Ethiopia’s announcement to start the (dam’s) filling process for the second year, as this represents an explicit violation of the provisions of the Declaration of Principles Agreement concluded between the three countries in 2015,” said an Egyptian Foreign Ministry statement.

“The second filling of the dam constitutes a violation of international laws and norms governing the exploitation of the resources of transboundary rivers,” the ministry added

It stressed the work on the Grand Ethiopian Renaissance Dam represents “a dangerous escalation that reveals Ethiopia’s bad faith and its desire to impose a fait accompli on the two downstream countries, and its indifference to the negative effects and damage that its interests may be exposed to due to the unilateral filling.”

On Monday, Egypt’s Irrigation Ministry said Ethiopia had informed it of the start of the dam’s second filling process, stressing Cairo’s rejection of this “unilateral step,” and warning of its repercussions for regional and international peace and security.

On Thursday the Security Council will hold a session at the request of the Nile downstream countries of Egypt and Sudan, the second of its kind after a session held a year ago, which ended with the parties to the crisis calling for dialogue under the leadership of the African Union.

Over the past 10 years, Egypt and Sudan on one side and Ethiopia on the other side have accused each other of failing talks and mediation efforts over the controversial dam.

On March 30, Egyptian President Adel-Fattah al-Sisi said “the water of the Nile is a red line, and we will not allow our water rights to be compromised, and any undermining of Egypt’s water (share) will have a reaction threatening the stability of the entire region.”

Ethiopia is insisting on carrying out the second filling stage of the dam in July, in a unilateral move amid a lack of agreement with neighboring Egypt and Sudan.

Egypt has said the dam would reduce the flow of water downstream. Ethiopia maintains the dam is vital to addressing the country’s acute power shortage.